Heatwaves, a tornado and a new season – What’s been making Weather Headlines this week 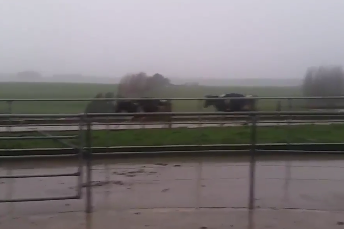 Another wild and windy week for New Zealand – as the westerly “sprinter” system (a hybrid of windy spring and winter weather) really takes over as July draws to a close.

Internationally, though, things have been just as crazy – with heatwaves in both North America and Europe – as parts of Canada, the United States and Mexico all experiencing close to record heat levels sustained through the past week.
Meanwhile in Europe the heat is already hitting.
By 10am on Thursday, areas just north of London were approaching 30 degrees. Across the Channel other European nations were sweltering in the mid-30s as of the 11am hour. And yes, Celsius.

In response, a leading climate scientist has welcomed a new 20-year Government “roadmap” that singles out climate change as an environmental research priority for New Zealand.
But Dr James Renwick, of Victoria University of Wellington, argues the issue could have been treated with much more urgency in the discussion document, which is now out for consultation.

#ClimateChange could have been treated with much more urgency in new Govt paper, argues #VicUniWgtnâ€™s @CubaRaglanGuy https://t.co/GH9KMzwBYV

Staying on a similar theme, but a little closer to home, rising sea levels that submerge entire islands were supposed to be a distant possibility of an apocalyptic future. But in the idyllic Pacific, that future is here.
Five of the Solomon Islands have completely disappeared under water over the past seven decades, one drawing its last breath as recently as 2011, according to a study published in Environmental Research Letters.

And across the Tasman in Australia, both Canberra and parts of New South Wales have seen records pushed or broken by July temperatures – as warm conditions blanket the country in smothering nighttime heat.
Parts of the country were pushing into the late teens overnight – something virtually unheard of in July.

Strong negative #IndianOceanDipole is influencing Australia’s rainfall. So what is the IOD? https://t.co/z5TdeuIiIFhttps://t.co/PDm6MEuIvt

Back on home soil, many people have been asking WeatherWatch.co.nz “Where is winter?”, as a neutral weather pattern has led to enormous high pressure systems over Australia, fuelling big powerful westerlies in the Southern Ocean – until this week that is!
Like putting a leaf-blower up to a hose, it cuts off the southerly flow towards New Zealand and blocks it from heading north. The westerly traffic is like a motorway, going one direction and with no on-ramps (at this stage) for the southerlies to get going.

A Te Awamutu family scrambled into a small bathroom to take cover as a tornado roared through their property on Tuesday night.
Daryl Ritsema and her husband Peter were sitting in the warmth of their lounge when their brightly burning fire started spewing smoke and embers into the room – “it was like a freight train”, she said.

And there were more events in our night skies of note this week, as WeatherWatch.co.nz received many reports of a spectacular fireball across the lower South Island city of Dunedin – but also right across the South Island.
At first we thought it was a meteor, but just after 7:30pm we contacted the media to let them know we thought this may have been space craft debris or a satellite – check out the full story, here.

And finally, check out our favourite posts and pics from another wild week of weather around New Zealand in our social media roundup, here – as well as check out our updated weekend weather forecast with Philip Duncan, here.
And don’t forget to let us know how often you fly in our latest poll, below – the results are really interesting so far!