Fire, flooding and gales – Your Week in Weather Headlines 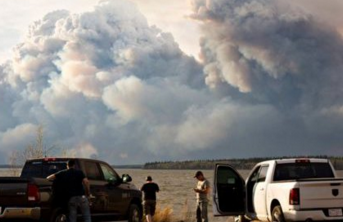 2016 has already thrown up enough weather headlines and big news stories to keep us going for the rest of the year – and yet each week we are faced with more and more interesting, concerning and tragic climate and weather news.

Let’s start in Canada, where residents in the Alberta region are still praying for a decent spell of rain to halt, or at least stall, the massive wildfires raging through forest and residential areas.
Almost 90,000 people have had to abandon the oil town of Fort McMurray.
Sky’s Amanda Walker said smoke can be seen in almost every direction, and while planes are dumping water on the flames, Ms Walker said it’s a near impossible task because of the scale of the fire.

Travelling a little farther south, this week we posted an incredible 360 degree video of a close-range tornado near Wray, Colorado.
Many tornadoes struck the USA through states in the Midwest this week, causing millions of dollars in damage.
The video was shot with a 360fly camera – which can be navigated using the arrows at the top left of the screen.

Staying in international news, and the World Health Organisation this week released a shocking new report about air quality in some of the world’s largest cities.
The report shows more than 80 percent of people in urban cities are breathing dirty air.
Populations in low-income cities are the most impacted, but all regions in the world are affected by air quality levels currently exceeding WHO limits.

A little closer to home, Australia this week saw yet more extreme weather, after heavy rain flooded a number of outback roads in South Australia’s far north, with between 40 and 60 millimetres recorded in some areas over the past few days.
Large stretches of the Oodnadatta, Birdsville and Strzelecki tracks were closed to all vehicles, cutting off several towns including William Creek, Oodnadatta and Innamincka.

A wild weather warning has been issued for parts of South Australia… #sun7 https://t.co/Z5iJ9NID8o

Back home in New Zealand, this week saw a change of pace – and a change of weather pattern, as “true autumn” begun to make its presence felt, after more than a month of lingering summery conditions around parts of New Zealand.

Temperatures stayed very high in some places – especially in the east of both islands – as the westerly windflow pushed warm air across the country and onto eastern regions.
Dunedin temperatures, for instance, smashed most records this week after a series of private weather stations recorded the mercury getting up into the mid to late 20s(!) – when the May average for this time of month is nearly half that.

On the other side of the country, meanwhile, that same strong northwesterly wind system pushed gusts of more than 110km/h in southern Westland, Fiordland and Stewart Island.
WeatherWatch head analyst Philip Duncan said the worst of the wind was reserved for inland north Canterbury, north of Christchurch, and Kaikoura on Thursday.

You can check out some of our readers and viewers pictures of the week, right here, and see what kind of conditions kiwis have been snapping both here and overseas.

Also, you can have your say in this week’s poll, below – as well as checking out what the rest of the weekend holds in store with Philip Duncan’s latest weather video, here.