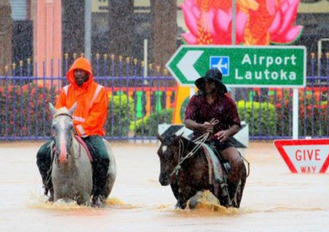 Cyclone Zena has passed to the south of Fiji overnight. The nation was bracing for a repeat of the devastation wrought by Cyclone Winston six weeks ago, from which it hasn’t yet recovered.

However the tropical storm hasn’t hit quite as hard as expected.

WeatherWatch head analyst Philip Duncan said it looks as Cyclone Zena has tracked as predicted, and headed past the south of the island nation overnight.

He said the threat now is for the islands to the south and south-east of Suva, then later today it’ll hit Tonga, although it’s meant to pass over fairly quickly and the damage will likely be fairly minimal.

Fiji has been deluged with intense rain that’s brought more flooding. Two people have died as a result of the storm.

“I can’t imagine what it must be like in some of those villages near the rivers where the water levels have been rising at rapid rates, so it has been extremely tough for them,” he said.

The Defence Force will spend the morning with Fiji’s Disaster Management teams, working out whether help’s needed in the country’s outer islands.

Our reporter @RoundSally is in #Fiji & spoke to disaster authorities about the need for more tents and tarpaulins: https://t.co/DmivIevWpg

Colonel King said although there was heavy rain and some strong winds from Cyclone Zena, it was Cyclone Winston that did the real damage.

He said today they’ll be monitoring the outer islands this morning, to make sure there isn’t anywhere worse hit than it looks.

“Then we’ll be able to have a look at what we may look to contribute, if there is going to be any response.”

Aid worker Corinne Ambler said many of the areas preparing for Cyclone Zena already received a battering from Winston.

“People who have gone back to their villages have adequate shelter. We’re concerned about how they’re going to come through this latest cyclone because the structures that they’re living in are probably not that weather proof.”

Ambler said 80 volunteers have been on stand by, waiting for roads to be reopened.

“They’re really itching to get out there and help people and assess the situation and see what kind of assistance people need.”