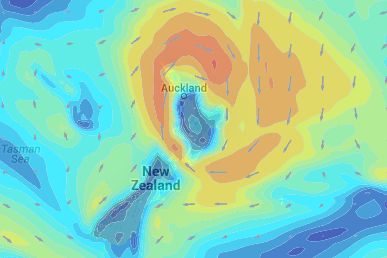 The remnants of tropical cyclone June continue to push down across the North Island with patches of rain and high humidity.

Rain with June won’t be lingering too long in most places as the system continues to weaken, which means farmers and those in need of rain water should get a good top up without the high risk of flooding for most regions.

As expected by WeatherWatch.co.nz the majority of the severe weather remains out at sea, with northern New Zealand today mostly affected by fairly normal patchy rain.

“Earlier today June still had Category 1 cyclone strength winds at Norfolk Island, according to Australian forecasters, so we do expect strong winds to move in over the next 24 hours” says head weather analyst Philip Duncan.

As the storm unravells the centre of the low will expand, meaning a large area in the middle of the low will be fairly calm, with the gales wrapped around that centre.  Tomorrow, as the the low crosses the North Island, a large area may have calm but as the low sinks southwards the strongest of the winds, in the north western quadrant, will drop down over the upper North Island bringing gale force sou’westers”.

“Generally speaking this isn’t a major storm system, but pockets of both islands are exposed to severe weather over the next few days” says Mr Duncan.

The next tropical or subtropical low may be in the northern Tasman Sea this coming Sunday. It’s unclear if it will bring rain or showers to northern New Zealand on Auckland Anniversary Monday. Current data suggests a 40% chance of rain jumping to 70% on Tuesday for Auckland and other northern areas.

– Image / Noon Tuesday’s wind map, showing the large calm centre over the North Island with gales wrapped around it / Weathermap