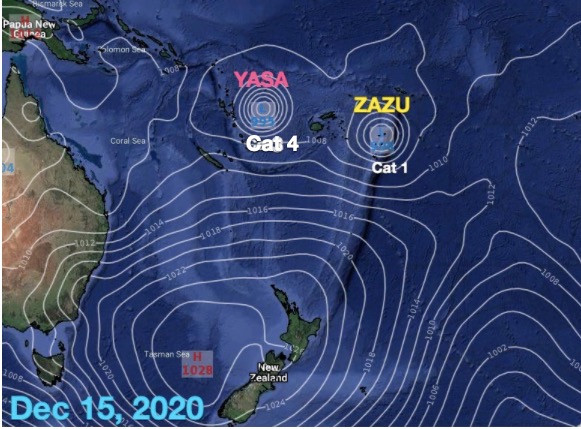 Updated 7:17pm Tuesday — We have another tropical cyclone north of NZ and it’s been named ZAZU. Zazu is tracking at sea between Tonga and the Cook Islands.

As of 7pm Tuesday New Zealand time Cyclone Zazu was upgraded to a Category 2 storm.

Tonga and Niue are on the edges of this storm.

Meanwhile, Cyclone Yasa near Vanuatu and Fiji is now a Severe Category 4 cyclone with sustained winds of 160km/h to 200km/h around the centre.

The cyclone was Category 2 earlier today. It has rapidly intensified.

ZAZU RISKS
Cyclone Zazu looks a bit like a bowling ball missing the pins. (the pins being the islands in this case). However it’s so close it will cause some issues in both Tonga and parts of the southern Cook Islands.

Zazu was expected to grow in to a Category 2 storm today. Dangerous seas, heavy and sustained gales may brush these island nations, with the worst hopefully remaining at sea. Definitely one to monitor closely with local authorities in both Tonga and the Cooks.

Cyclone Zazu does not pose a threat to NZ.

YASA RISKS – FIJI
All eyes should be on this storm as it churns just off shore from Vanuatu and is likely going to have a decent impact on parts of Fiji.

It is now a severe tropical cyclone – Category 4.

It may also bring some wind, rain and dangerous seas around Vanuatu for a time from the east.

The Fiji MetService and other modelling indicates YASA may grow into a severe category 5 cyclone. Currently it’s spinning in roughly the same spot out at sea. It’s likely to remain in this similar location across Tuesday and Wednesday.

However from late Wednesday and across Thursday and maybe Friday Cyclone Yasa could have a major impact on Fiji as it starts to move southwards.

Slips, flooding, structural damage to buildings and coastal inundation are all highly possible if this scenario plays out. Those in Fiji should be closely monitoring this cyclone and preparing to evacuate, move to shelter and listening to local authorities and warnings.

This now more direct path into Fiji is of serious concern, especially with Yasa projected to be a major cyclone strength-wise by then… potentially Category 5 which can have sustained winds over 200km/h.

YASA – NEW ZEALAND:
While NZ may get hit by what is left of Yasa (EX-cyclone by then) its important to note it may not even be a storm by the time it gets here. Every single tropical cyclone loses its warm core just as it approaches NZ. Some, like Cyclone Gita a couple years ago, can retain the look and power of a cyclone during this process. Others, fall apart.

Modelling certainly is hinting that any possible NZ hit may not be from a storm at all – but simply the remnants of an ex-cyclone, in the form of a low pressure system and rain.

Latest tracking today is still hinting the remnants of Yasa may reach the Tasman Sea and drop south over NZ. WeatherWatch.co.nz’s confidence of a direct hit in NZ remains at 40% (which means a 60% chance of no impact). Despite the confidence levels, the chance of it remaining a powerful storm by the time it reaches NZ looks weak at this stage. So our chance of any “serious impact” in NZ remains at just 20% (for example, severe weather warnings issued by MetService).

The focus this week should be on Fiji with Cyclone Yasa.

CHRISTMAS DAY IN NZ?
Normally by now we’re ready to lock in the forecast 10 days from Christmas with some certainty. But with a weakening ex-cyclone possibly in the area we have a few possible Christmas Day weather scenarios in NZ.

As of today our IBM data will also be factoring in where Yasa’s remnants might go and we’ll be adding that into our updates across this week.

IMPORTANT!
Remember, while a moderate risk of [what will then be] ex-cyclone Yasa reaching NZ, there is only a low risk this may be a ‘storm’ still by then in our part of the world

WeatherWatch.co.nz – Our risks based on all the best available data today:
40% Chance the remnants of Cyclone Yasa reaches NZ
20% Chance Cyclone Yasa will prompt severe warnings in NZ if it arrives