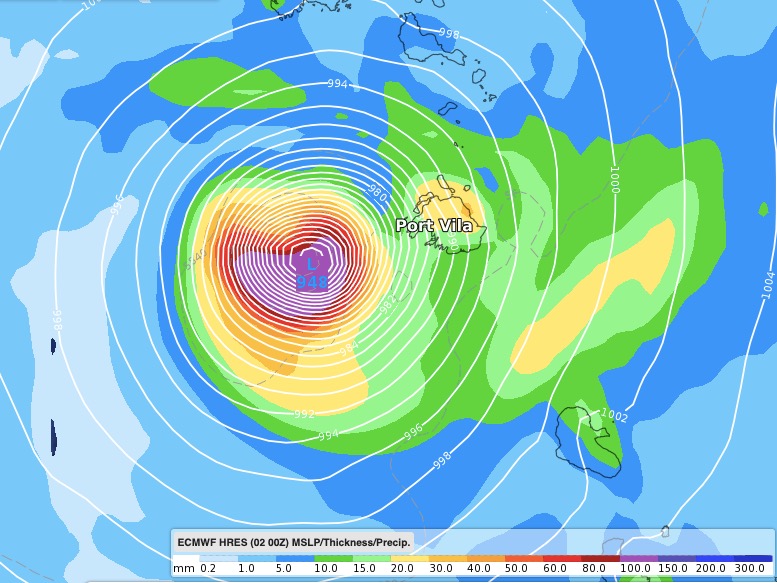 We have a new tropical cyclone, named HAROLD, and it’s likely to track directly to Vanuatu and be exceptionally close to the capital Port Vila by Monday.

WeatherWatch.co.nz says modelling has been in agreement for days on this particular tropical storm. Head forecaster Philip Duncan says it may be the most serious storm so far this season in the South West Pacific because it’s heading for land. “We’ve had a few cyclones this year but they have mostly remained at sea missing places like New Caledonia, Australia, Norfolk Island, northern New Zealand, the Cook Islands, Samoa and Niue. However Cyclone Harold is on course to directly impact Vanuatu based on latest official guidance”.

But Vanuatu is made up of many islands, meaning the storm may not adversely affect everyone. Current modelling suggest southern islands in the group may be more exposed.

Mr Duncan says the cyclone will likely grow into a severe storm with a Category 3 or 4 rating and air pressure plummeting into the 940hPa range by noon Monday.

“Long range air pressure maps paint a sobering picturing for this Monday and those in Vanuatu should be prepared for the potential of wind damage, rain flooding and coastal flooding due to storm surge as Cyclone Harold moves in or tracks very nearby”.

Cyclone Harold will likely track over New Zealand waters mid next week but it will be well away from New Zealand itself, with no weather impacts expected here on land.

We’ll have additional updates over the weekend for those in Vanuatu tracking this Tropical Cyclone. Of course any tropical cyclone can be unpredictable – things may still change between now and Monday (for better or worse) so keep up to date with local official forecasts and also our weekend news updates here at WeatherWatch.co.nz.

How will it affect Niue

Hi Terence, it’s well south of Niue and moving out to sea now. Take a look at out latest weather video. 🙂
Cheers
– WW

Any chance of it hitting Samoa?

Hi there, no it’s not forecast to hit Samoa, it should drop south of Fiji. Keep up to date over the next few days.
– WW