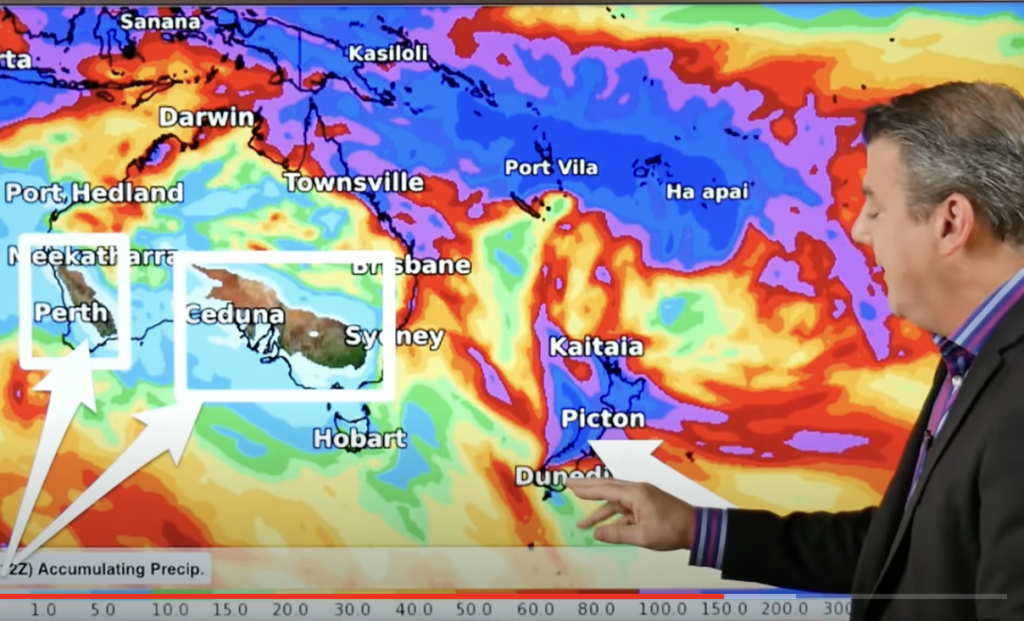 Originally published Feb 2 — After a dry two months for many parts of New Zealand it looks as though the La Nina rains are finally going to cross the country in early February.

Both the South Island and North Island have the chance of heavy rain in the first two weeks of February as low pressure expands to cover an area the size of Australia just north of NZ – then sinks southwards to impact NZ.

It means humidity and tropical warmth is about to shoot up – although it’s worth remembering that the Southern Ocean is still active too and as WeatherWatch.co.nz exclusively said last year, our summer this year would be a mixture of La Nina weather events and the odd, cooler, southerly from the Southern Ocean.

The pattern for February shows some good chances of rain in dry areas – like the entire western side of NZ (often drier than usual in a La Nina summer due to the increase in northerlies and easterlies). At the time of publishing this the MetService was warning West Coaster of up to 750mm in the coming days as this vein of tropical rain moves into western NZ.

Eastern NZ – normally very dry in summer – will also get some of this wet weather as it slowly moves eastwards in the days/week ahead.

Southland has been in quite a dry bubble for the past couple of months and while some brief rain/showers are expected, we do expect southern NZ to remain drier than normal for much of February with perhaps as little as just 5 to 10mm for some areas up to Feb 17th. Southland may well be one of the driest, if not the driest, region in NZ in February – at least for the first half of the month.

As far as air pressure is concerned – still some solid highs coming out of southern Australia and moving eastwards towards us, perhaps more noticeable later in February. For now, the first two weeks of the month look to be dominated low pressure zones in the Tasman, tropics and sub-tropics.

Temperature-wise and all of NZ will, once again, lean about 0.7 to 1 degree above normal, as we’ve seen for the past year. It’s not the same case in eastern Australia where easterlies will keep their temperatures cooler than usual in places like inland NSW and QLD. The odd southerly injection will keep some southerners on their toes though. The last Friday of January saw a light frost in some parts of Southland… one week later (this morning) and the temperatures were in the late teens.

February In a nutshell:
Still some large dry areas this month, but February is kicking off with a lot of rain, low pressure and humidity in the NZ area. Humidity and heat will ease for the first weekend of February (Waitangi Weekend) as a southerly changes moves northwards, but northern NZ may be stuck in more of a La Nina set up until the middle of this month, while the very south of NZ may be stuck under high pressure keeping things quite dry. All of NZ leans warmer than average overall. – WeatherWatch.co.nz.

THE AIR PRESSURE SET UP FOR FEBRUARY

RAINFALL
Upcoming rainfall is significant for New Zealand. At the time of publishing this February ClimateWatch update the South Island had a rain event with Government forecaster MetService saying up to 750mm was possible for the ranges and hundreds of mm for coastal areas. WeatherWatch.co.nz says the tropical energy dragged down by this low will linger in the NZ area for the first half of the month.

So while rain starts in the South Island in Week 1 of February, it will spread into the North Island later this week and into Week 2, bringing the chance of heavy rain and even localised flooding into both islands over about a 10 day period.