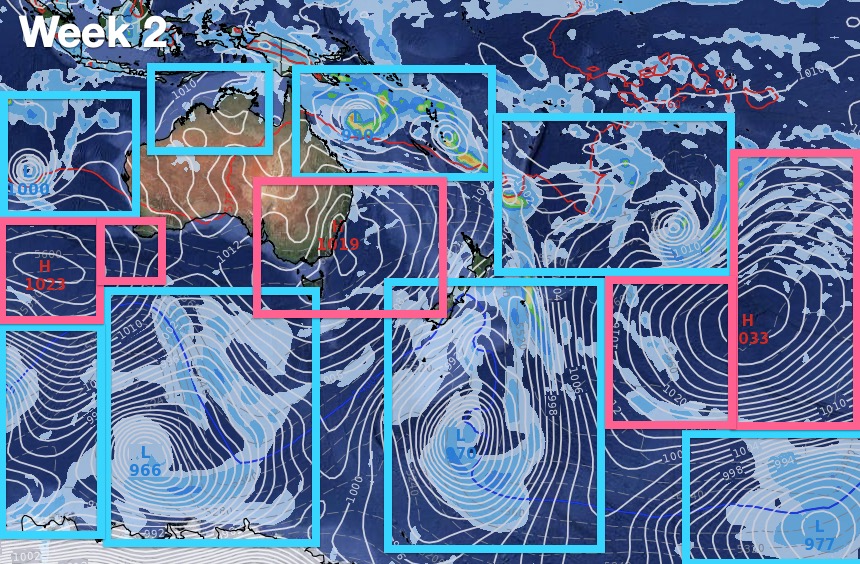 March is here and now the Autumn weather pattern will continue to expand as summer weather continues on for some, but increasingly shows signs of fading.

THE TROPICS:
The tropics will be very busy for the first 10 days of the month north of NZ with several lows developing. This will make for very high rainfall accumulations (200 to 300mm) north of New Caledonia, especially as a tropical cyclone will likely form in the Coral Sea area this week and then track east to south eastwards (towards New Caledonia) during Week 2.

THE SOUTHERN OCEAN:
South of NZ is about to get very stormy again. For those who followed our January update we were talking about how stormy the Southern Ocean was, with not just large lows but powerful low air pressure too. In February that all eased. But March looks similar to January with some big storms in the Southern Ocean injecting more windy westerlies into the South Island and lower North Island, along with some colder southerly changes.

LA NINA:
Scientists we trust at Australia’s Bureau of Meteorology (BoM) have their next main climate update on Tuesday March 2. As of this update they have been consistent for many months forecasting La Nina would be a moderately short lived event this time around. BoM’s accuracy continues on with this event.

TEMPERATURES:
Despite some colder injections (especially the end of Week 1 of March and first weekend) the month ahead still leans warmer than average.

This monthly ClimateWatch report is brought to you by www.RuralWeather.co.nz and IBM, in conjunction with WeatherWatch.co.nz