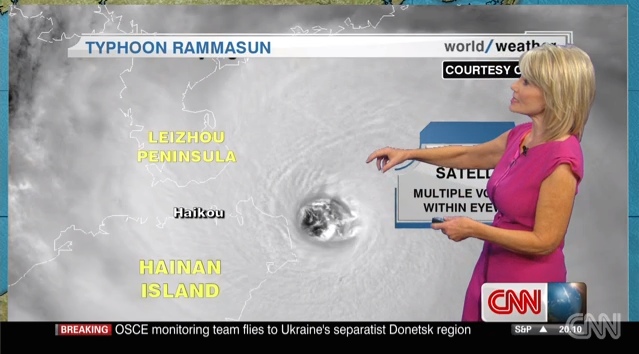 The strongest typhoon to hit southern China in four decades has killed at least 16 people in the region after leaving scores dead in the Philippines.

Strong winds and rain from Super Typhoon Rammasun hit dozens of southern coastal cities in the provinces of Guangdong and Hainan and the region of Guangxi, affecting more than 3 million people, the Chinese state news agency Xinhua reported Saturday.

The powerful storm made landfall on the island province of Hainan about 1:30 p.m. Friday after veering west, according to the China Meteorological Administration.

Planes were grounded in Nanning, the capital of Guangxi, stranding 1,300 passengers, Xinhua said, and train service between Nanning and coastal cities was suspended.

Rammasun struck the Philippines earlier in the week, killing at least 94 people and displacing more than half a million, according to the country’s National Disaster Risk Reduction and Management Council.

Most of the victims died after being hit by falling trees, collapsed structures or flying debris. Others drowned or were killed in landslides, the Philippines News Agency reported.

The typhoon, known locally as “Glenda,” made landfall near Legazpi City on the country’s east coast late Tuesday and barreled past the capital Manila.

After weakening during its passage across the Philippines, the storm gained strength again over the South China Sea, rising rapidly from a Category 1 storm to a Category 5, as it made its way to China.