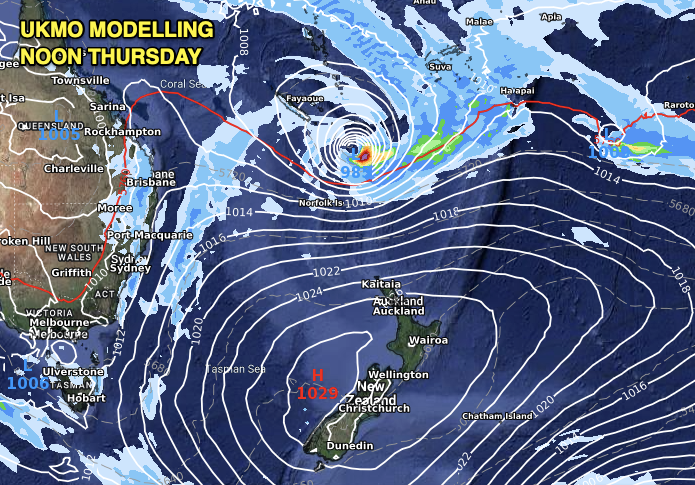 The next South Pacific tropical cyclone for the season may form this week about 2000km north west of New Zealand, near New Caledonia. Long range reliable global modelling has been showing for days either a tropical storm forming – or a couple of low pressure zones – some time this coming week as low pressure shifts from the Coral Sea area towards New Caledonia.

The storm – or tropical low – will then likely drift south to south eastwards towards New Zealand but, unlike Cyclone Dovi, this low pressure zone has a more complicated journey due to powerful high pressure over southern NZ. “Storms and lows weaken when they run into high pressure, especially powerful high pressure, so the stronger the southern high is then the lower the chances are of this potential storm making it to New Zealand” says WeatherWatch.co.nz head forecaster Philip Duncan.

“Most modelling suggests the low will lie north of NZ then it may struggle to come further in to land, meaning a windy easterly ‘squash zone’ of air pressure may set up for the top of the country later this week, but damaging winds and stormy weather overall may be less likely on land and more likely out at sea”.

In fact, the next week ahead looks to be drier than average for most parts of NZ due to the high pressure zone moving in.

But if the low does track in close enough windy easterly conditions along with very dangerous beach and marine conditions can be expected – and some modelling still shows northern NZ is within the ‘cone of uncertainty’.

When ex-tropical Cyclone Dovi hit the North Island recently it dropped down from the same area as this next low is forming in. But Dovi tracked in southwards very quickly as there was a ‘gap between highs’, allowing a natural set up for Dovi to be funnelled down southwards towards the North Island with limited obstacles. “For this next tropical low the high pressure zone looks to be centred over southern NZ and that acts like an invisible brick wall in the sky to really slow down storms, a bit like how a strong sea wall stops big storm waves from advancing on to land” says Duncan.

Not all computer guidance is in agreement that this low pressure zone will become a tropical cyclone either – it may become too large at the centre for gales to develop all the way around it, or may have another ‘twin’ nearby low ‘stealing’ some energy from the main centre. Also, not all computer models agree the low will even track SE towards NZ, some suggest it will fall apart to our north and the rainy remnants will then drift SW towards Queensland (where they don’t want more rain due to recent/current heavy rain and deadly floods).

So, how do you make sense of the various models and their disagreements? The forecast data we use at WeatherWatch.co.nz and RuralWeather.co.nz crunches all reliable global models to produce the most likely rainfall and wind data. For now, the conclusion is that the next 7 days ahead look mostly drier than average for much of NZ but winds do look blustery with easterly gusts to gale force mid to late this week if the low does track close enough. Our IBM forecasts are updated hourly and global updates mostly update every 12 to 24 hours.

MetService may issue watches and warnings later this week if the tracking maps below are reliable. The public MetService warnings now display LIVE on our website when active – and in your local forecasts (coming to the app later this year).

We’ll update again on Monday and have our next weather video by noon. Expect your local forecasts to change a bit in the coming days as modelling and data comes to a better consensus/agreement on precise tracking. For now, high pressure may well be the dominant force for New Zealand, as it was with Cyclone Cody back in January.

NOT ALL MODELLING AGREES ABOUT TRACKING
This is because of the size of the powerful high pressure zone tracking into the lower South Island and EXPANDING into NZ. It’s this expanding/moving part of the high pressure zone northwards that will ‘guide’ the low … either stopping it short of New Caledonia…or letting it slide SE towards NZ, or even SW towards Queensland. As head forecaster Philip Duncan said in a YouTube weather video last week, “it’s a bit like balancing an egg on a roof, it’s more likely to roll down one side or the other”.

The incoming high over the South Island is the main guiding force and the maps above and below show how the various placements of that specific high pressure zone centre make all the difference to the future journey of the tropical low.