Cyclone Yasa brushing Tonga, but the centre well out to sea 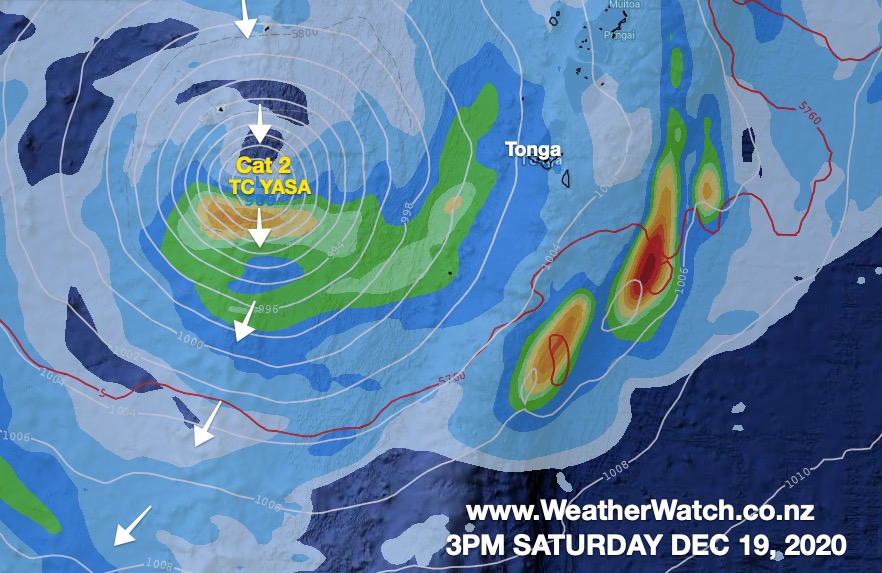 Yasa is no longer a ‘severe’ tropical cyclone but is still a powerful storm packing a punch as it passes just to the west of Tonga today.

The capital Nuku’alofa has rain with heavy falls and thunderstorms today along with strong winds, up to gale force at times.

But the centre of Yasa should remain just enough to the west to spare Tonga from much more serious damage.

Yasa was to be at its closest to Tonga by about 3pm Saturday NZDT.

Yasa is now a Category 1 cyclone (as of 9pm NZDT).

AFTER TONGA – IS NEW ZEALAND NEXT?
It’s still not entirely clear if Yasa’s remnants will have any impact on New Zealand – this is due to powerful high pressure which is dominating over the North Island and out to the east.

But it is looking pretty clear that WeatherWatch.co.nz expects Yasa to be torn apart and does not expect any “storm” reaching NZ.

However Yasa does have the possibility to punch through the atmosphere and open up a corridor of more tropical weather into the NZ area. Latest modelling today shows this could happen – but it may easily happen just a short way offshore and entirely miss NZ. We’ll have much more details on Monday – including locking in that Christmas Day forecast with a bit more certainty.

Please note, IBM’s super computer Watson is now crunching *all* the weather models and is already producing your local Christmas day forecast. Check your hourly forecasts at both WeatherWatch.co.nz and RuralWeather.co.nz for the current Christmas Day forecast.