Australia: Tasmanian snow great for tourists; locals not so much 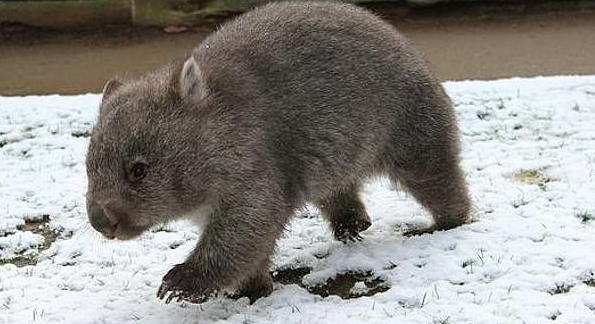 While visitors to Tasmania’s snow-laden areas are revelling in the heaviest falls in the state for more than a decade, those living among in it are less impressed.

Residents in the Central Highlands said they are ready for spring, after bearing the brunt of the snowy winter.

Dangerous roads have isolated communities and some tourism operators are struggling to get supplies.

It is not quite the pub with no beer yet but the Great Lakes Hotel at Miena has been unable to bring in supplies because trucks cannot reach it.

There has also been no rubbish collection for four weeks.

A wombat contemplates life in the Tasmanian snow http://t.co/1hxu4ueQpi pic.twitter.com/WLuisAky2x

Owner Kaylee Hattinger has lived at Liawenee for 11 years and said it was the first time she had been in snow that remained thigh-deep for days.

“We haven’t had a garbage pick-up for four weeks because the garbage truck can’t get in,” she said.

“We’re over the snow and the ice, we’re over having wet feet. We’re over not having any stock because we can’t get supplies in and out.”

Ms Hattinger said her staff were also having trouble reaching the lodge.

While many people have enjoyed the continuing snowfall in other parts of the state, Ms Hattinger said there was too much snow in the lakes area to reap the benefits of tourism.

“It’s too dangerous for tourists to come up here if they’re not used to driving in poor conditions,” she said.

Hundreds of households have spent the past few days without power with TasNetworks unable to reach the area until Tuesday.

Last week Liawenee recorded its coldest August temperature of -11.1 degrees Celsius and while the region was used to a white winter, it was the heaviest snow in about 12 years.

Locals said long, white winters were a regular occurrence in the past.

Helen Monks manages the Central Highlands lodge and has lived in the region all of her life.

“It would be common to not see the tops of the fences, the snow would be over that and you’d be totally isolated for weeks on end.”

It is a trend some hope will not come back around.

But local fisherman Greg Pullen said he did not mind the quiet start to the trout season.

“[It’s a] bit of a challenge to find any open water that’s not frozen,” he said.

“The wonderful thing about it there hasn’t been much competition from other fishers.”