Australia: Snow in Tasmania causes havoc – more on the way 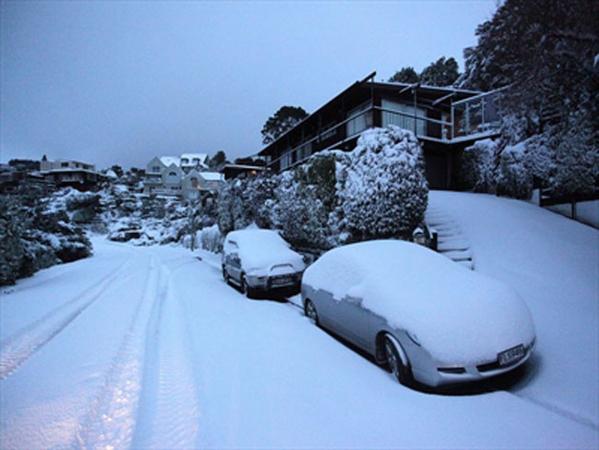 Two men stranded with their car in deep snow at Mount Field, about 75 kilometres north-west of Hobart, for nearly 24 hours have been rescued.

Search and rescue personnel and a road contractor moved snow and fallen trees off the Lake Dobson Road to make their way to the men.

The men were then able to drive back down to the Mt Field visitors’ centre.

Earlier a helicopter rescue was abandoned because of poor weather conditions.

“That vehicle, there’s probably half or about three quarters of a foot of snow at that area,” he said earlier on Monday.

“My understanding is that they are aware of the warnings but drove to that location anyway and have got stuck.”

The rescue helicopter crew also discovered another car stuck in snow, but said the occupants were well-prepared and were happy to stay put.

A chopper is rescuing a couple whose vehicle is stuck in deep #snow in #Tasmania. http://t.co/rdcsWnIgPB pic.twitter.com/1FLlxoaa1A

A cold front brought heavy falls to the south of the state early on Monday morning, including in Hobart, and snow is still falling in the north.

“As opposed to [snow at] sea level that we saw with this event, widespread across the state, we are looking at the snow line dropping down again tomorrow night into Wednesday morning as showers extend once again state-wide.”

Snow reached sea level for the first time since 2005, with Hobart’s beaches and central business district receiving a dusting.

Launceston in the state’s north saw snow despite its clear and sunny forecast, as did Burnie in the north west.

Bureau of Meteorology spokesman Tristan Oakley said the state’s west, where snow had also reached sea level, “could be quite bad for most of the day, into the evening”.

Snowfalls in Hobart are rare – the last time the CBD experienced a “dump of snow” was on July 25, 1986 when the Tasman Bridge was closed.

“This morning we were dealing with 19 accidents at one time,” he said.

“Thankfully none of those accidents were deemed serious.”

Inspector Williams said many of the accidents were a result of people not driving to the conditions.

“A lot of the accidents are based around … the lack of braking distances, slippery conditions on the roads, and people are just not predicting the effect that those conditions have on their driving,” he said.

“Make sure that you drive to the conditions.

“Your braking distances will be greater and you need to leave a lot of reaction time between you and other vehicles.”

Snow forced the closure of 36 state schools in southern Tasmania, with many teachers unable to drive to work.

Judy Travers from the Department of Education said a couple of thousand students were affected.

She said the department was not contacted by any parents who needed alternative care for children.

“Our schools were well prepared on Friday because the weather bureau was able to give us early warning about the snow, so most schools alerted their communities and the children that this might be the reality Monday morning, so they were pretty well prepared early,” she said.

Parents have been advised to check school websites and social media for further information.