Australia: SA and Central Aus drenched in ‘the big wet’ 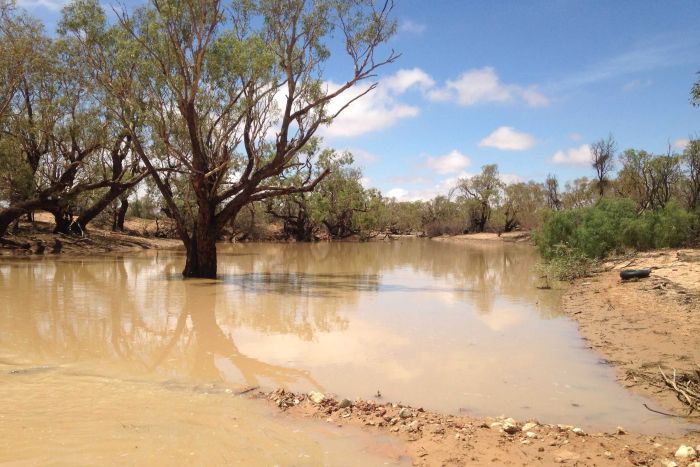 The Central Australian big wet has dumped more than half the annual average rainfall in the last six days.

The Todd River continues to flow through Alice Springs, but is receding and the forecast is for conditions to clear.

Station manager Ben Brooks said the clean-up was underway after the homestead was inundated with 15 centimetres of water.

“The water has subsided quite quickly and it’s all back into the main channel now,” he said.

“The main creek is just a trickle.

“We’re just trying to do all the clean-up now.

“The water was only in the house for four or five hours, but it’s just all the dirt, silt and debris left behind and it left a big mess for us to clean up.”

But Mr Brooks said, despite the inconvenience, the rain was very welcome.

“We can’t move anywhere too much because roads are cut,” he said.

“We need to get graders and all sorts of things back here to try and get mobile here again.”

The clean-up also continues at the Kulgera, 275 kilometres south of Alice Springs, where flash flooding caused damage to buildings, including the local police station and roadhouse.

Roadhouse owner Chris Le Page said he was receiving helping hands from nearby cattle stations and hopes to reopen in coming days.

“The whole place is just covered in mud.

Pastoralists in South Australia’s far north are rejoicing with big rains falling over the weekend, some areas receiving more than 100 millimetres.

The rain has closed many roads in the outback and they could stay closed for weeks.

Cowarie Station, north of Marree, received 83 millimetres in the past week – 71 millimetres of that was in one day.

Owner Ashlee White says the creek on her property is running and the dam is full for the first time in three years, much to the joy of the entire family.

“The most exciting thing was getting my little boy, who is one in 11 days, out and playing in a puddle,” she said.

“That’s actually the first time he’s played in muddy water, so he didn’t quite know what to do with it to start with, but then he started eating mud and he was loving it.”

Charlie Stewart at Etadunna Station, just off the Birdsville Track, says he’s had 156 millimetres fall over the last week.

“The waterholes are filling up and you can see a green tinge already.

“It’s certainly put a bit of life back in the station,” he said.

“It’ll probably be three or four days before we’ll be able to get out.”

In the far west of New South Wales, many graziers are smiling after the sky let loose at the weekend, giving properties across the region a decent, long-awaited soak.

“It was fantastic. We had 64 millimetres of rain on Saturday, which was beautiful, really slow, soaking rain.

“Then on Sunday… we ended up with another 190 millimetres,” she said.

“Feed-wise, it’ll just be amazing, getting everything fired up.”
Blue Scott, from Coona Coona Station, 300 kilometres north east of Broken Hill, says the 50 millimetres of rain was a big relief

“Most of our dams here were dry.

“We’ve got nine or ten dams and there were only two left with water in them,” he said.

“So it’s taken the pressure off and boosted everyone’s morale.”