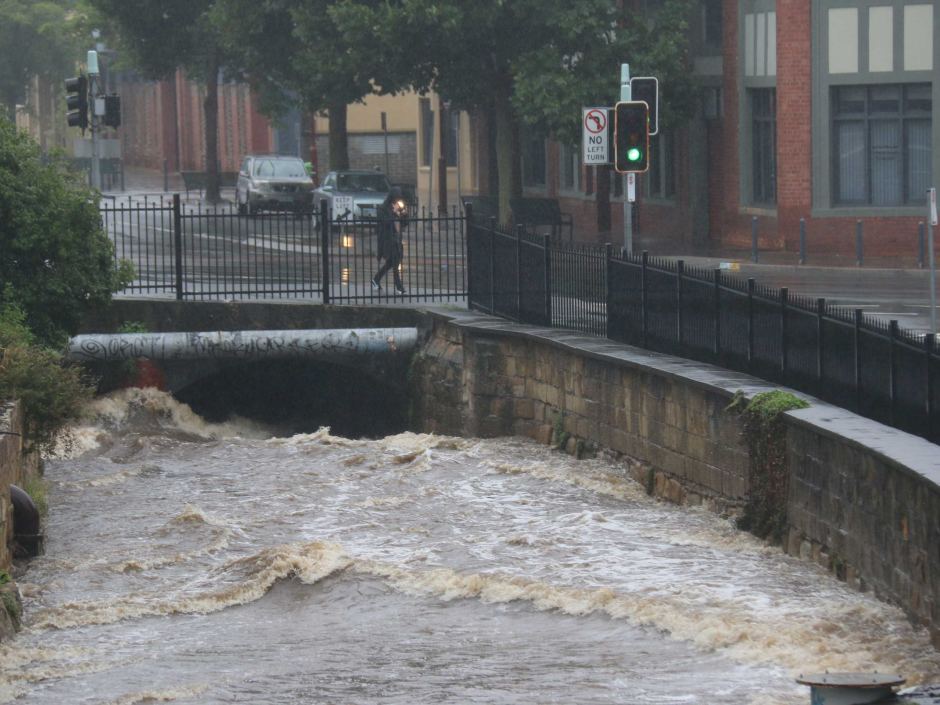 South-east Tasmania is counting the costs of damage from the heaviest rainfall in more than three years.

The State Emergency Service (SES) was called to dozens of water-damaged homes across Hobart and cherry growers fear up to 50 per cent of their crops have been affected by rain.

A deep low pressure system off north-east Tasmania has drawn moisture from the tropics, triggering what the Bureau of Meteorology (BoM) has described as a once-in-a-decade rainfall event.

The highest total was from the bureau’s Mount Wellington station, which recorded more than 150mm of rainfall on Tuesday night.

The Hobart suburb of Taroona broke a record, with 102 millimetres in the gauge.

South of Hobart, the Huon Valley received almost 80 millimetres, about two months’ rainfall in a day.

The SES received 25 requests for help from home owners whose properties were damaged by water and minor flooding.

Rain is forecast to ease by Thursday but the bureau is warning of possible flooding in parts of Tasmania.

The bureau’s Anna Forrest said a flood watch had been issued for the south-east, with rivers in the Huon catchment still rising.

“The rainfall overnight is still making its way from the higher peaks down into the rivers. So the flood watch is still out but we’re not going for any minor flood warnings,” she said.

Books dating back to 1852 were sodden and have been sent to Launceston for freeze-drying.

Librarian Juliet Webster said it was not clear whether they can be saved.

“These books are part of our rare book collection which was drenched,” she said.

“From a previous experience, it’s about a 60 to 70 per cent save rate so that the item will still come back and be useable.”

Peter Hopkins from Marine and Safety Tasmania warned boat owners about reports of large amount of debris in the water.

“If the boat misses it [the debris] and the ski biscuit [rideable tube] hits someone, it’s going to sustain a very serious injury,” he said.

“In these sort of conditions … water tends to get in down walls, into ceilings, and we actually got a few calls of water coming through ceilings,” he said.

He warned motorists to take care on roads due to flash flooding.

“We’ve had a lot of reports of blocked drains and water – it would be quite dangerous,” he said.

“It’s really up to people to drive to the conditions and be very cautious when they’re out and about.”

Mr Downing said other south-east Tasmanian communities also received heavy falls, including at Kingston with around 130mm, and South Arm and Taroona both recording over the 100mm mark.

“It’s a bit hard to put a timing on it but it’s probably the kind of event you’d see every 10 years or so during summer, and certainly falls such as at Buckland and Clifton Beach maybe even less likely than that,” Mr Downing said.