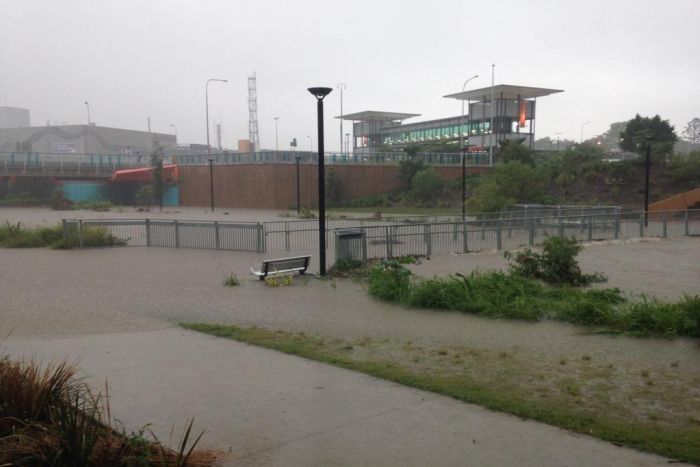 Severe weather has eased on the New South Wales north coast after two days of heavy rain and flash flooding, but some communities are still cut off.

Emergency services said 11 people had been rescued overnight because of vehicles in floodwater.

A pregnant woman had to be airlifted from Woodlawn near Lismore.

Some communities in the Bellinger Valley and the Upper Macleay remain isolated with minor flooding forcing the closure of low lying bridges.

“NSW SES volunteers over the last two days have responded to 78 requests for assistance, largely around the Port Macquarie and Kempsey areas,” he said.

“We have attended to requests for sandbags, leaking roofs and trees down on property.”

A resident at Taylors Arm in the Nambucca, Phillip Argue, said the flooding near his home was some of the worst he had seen.

“It just rose very, very rapidly here and came up to be one of the highest floods that I have seen here in a long time,” he said.

Bellingen SES spokeswoman Judith Ellem said there was an evacuation in the area overnight, but things are slowly returning to normal.

“Bellingen itself is looking good, as the river subsides all that will start to go back into place and things will be back to normal,” she said.

“Dorrigo is also fine and Urunga is also getting back into organisation again, because they also had to evacuate a caravan park last night at Repton.”

Ms Ellem said the main road over the Dorrigo Mountain – the Waterfall Way – remains closed because of landslips.

“There’s been 11 flood rescues overnight, so they need to realise the risk they’re taking,” he said.

“They have again involved people trying to drive across flooded roads.

“People shouldn’t be trying to get through these flooded roads because we’ve seen people die in recent days.”

Five people were killed on Friday night at Caboolture and Burpengary, north of Brisbane, .

Mr Burns said crews were still hard at work responding to a backlog of jobs around the state.

He said flooding was also reported around Sydney’s northern beaches last night, with about 100 jobs reported.

“They had a fair bit of rain in a short space of time,” he said.

“So we got some flash flooding occurring there and some damage to roofs and some flooding of some lower level houses and businesses as well.”

Residents from two apartment blocks in Sydney’s west had to be evacuated last night because heavy rain caused erosion at a neighbouring building site.

Structural engineers, the State Emergency Service and police were called in to the Harris Park site around 8:00pm when a below-ground section gave way.

Around 50 residents had to find temporary accommodation, and police closed the street while engineers assessed the safety of the site.

The SES asked for residents to be patient as crews responded to call-outs.