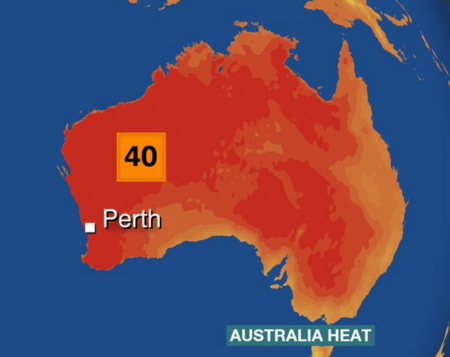 Perth hit a scorching 40.4 degrees Celsius on day one of a heatwave that is expected to last for at least five days.

The temperature is forecast to climb to 42C today and on Tuesday, a slightly cooler 41C on Wednesday and 39C on Thursday.

“Certainly it’s going to be sitting in the [Great Australian] Bight by Monday, so that’s going to direct some pretty warm, north easterly winds over the Perth and really the west coast region of WA over the next few days,” he said.

“We did have that rain spell at the start of February, but that’s well and truly gone now, and we’ve got clear skies and heating up temperatures expected this whole week.”

Mr McInerney said the hot weather was expected to extend to regional areas.

We’ve just passed 40 on the first day of the #PerthHeatwave. A weak sea breeze should provide a little relief soon. pic.twitter.com/W661qwn9ea

“There are going to be some mid-40s around up north,” he said.

“The temperatures are going to be pushing down towards the southern part of the state as well, so we’re looking at even 40 degrees in the South West Land division around Bridgetown and even in towards Collie as we go towards Monday and Tuesday.”

“For the southern part and certainly the South West Land Division, temperatures in the 40 ranges aren’t really seen that often.”

Mr McInerney said the unusual feature of the expected heatwave was the prolonged spell of hot weather.

“We don’t tend to get that much in the way of long period of times of having 40 degrees plus around the Perth region, so that’s really the main issue we’re going to see for the west coast over the next few days,” he said.
General Manager of Surf Life Saving WA Chris Peck said conditions were great for going to the beach, but people needed to take precautions.

“It’s really good conditions for beachgoers over the next few days with those off-shore winds, but it is important that people take care when going to the beach; [use] sunscreen, take some shade with you, keep hydrated, and here’s an extra tip, make sure you take your thongs because that sand is hot,” he said.

Mr Peck said the conditions meant that there were stingers along the coast, and people should go and see life savers if they get stung.

“With the stingers we are seeing, it’s about getting the tentacles off, if they are still on you, and washing them off in the sea water,” he said.

“When you get home, get a cold pack on there or get under a warm shower if possible.

“They [the stingers] will end up concentrated in certain areas depending on the beach type.

“Places like City Beach, Cottesloe, Sorrento, you tend to end up with a few more, but even on the open coast line, with the conditions we’ve got today and the next few days, the stingers will be around.”

Health authorities have advised people to reduce working outside, avoid exercising during the day and to look after young children and the elderly.