Australia: NSW cleans up after ‘largest storm in a decade’ (+VIDEO) 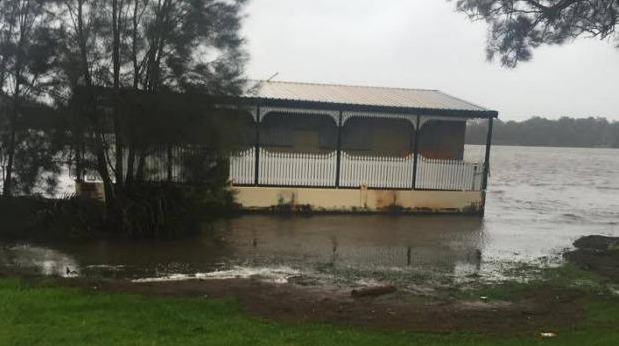 New South Wales authorities say they are dealing with the largest storm operation in a decade after three people were killed in “cyclonic” conditions that have battered parts of the state for hours.

Residents in the Hunter region were told to brace for more flash flooding overnight, while authorities door-knocked some Sydney residents to warn they may need to evacuate.

Conditions described as “cyclonic” have wrought havoc on the Hunter, Sydney, Central Coast and Illawarra regions, with rescue crews called to more than 1,000 storm-related incidents and more than 200,000 properties losing power.

In the Sydney suburbs of Manly and North Manly, the State Emergency Service (SES) visited homes and sent text messages to warn homes could be flooded if the Manly Dam continued to rise.

“The worst-case scenario, if the houses in our flood planning get affected, would be 660 residences,” Samantha Colwell from the SES said.

“In saying that, a lot of them are apartments so obviously the people on the higher levels are not going to get inundated.

“At the moment, people can stay in their homes, but we do actually encourage them to prepare because the last thing people want to do is find out about it in the middle of the night.”

An evacuation centre has been set up at the Hardbord Diggers club.

Further north, authorities warned some low-lying parts of Narrabeen and North Narrabeen, near Narrabeen Lagoon, could also be at risk, with an evacuation centre opened at Pittwater RSL and Mona Vale.

On Tuesday morning, three elderly residents were found dead in the town of Dungog, north of Newcastle, where more than 300 millimetres of rain fell in less than 24 hours.

Authorities said the circumstances around the deaths were still still being investigated.

Locals said several homes were washed away, and a woman and two children were rescued from a house as it was washed down a street in nearby Greta.

SES deputy commissioner Steve Pearce said the storm was like nothing he had seen before.

“I haven’t seen a storm of this magnitude in my time here at the SES and, indeed, this would be the largest storm operation in the last 10 years,” he said.

“We’ve had over 6,500 requests for assistance and on top of that, with the enormous amount of rainfall – up to 320 millimetres in over 24 hours – we’ve seen about 80 flood rescues. We’ve seen homes washed away, whole streets decimated.”

He said thousands of emergency services were on the ground and more were coming in from around the state to help on Wednesday.

The SES sent emergency alerts to more than 100,000 mobile phones in the Hunter as it was battered by relentless wind and rain on Tuesday afternoon.

Newcastle Mayor Nuatali Nelmes told 7.30 the city looked like it had been in a disaster movie.

She said roads were under water, trees had been blown down and roofs had been ripped from buildings.

“We’re actually bracing for worse to come,” she said.

“Overnight, we are bracing for potentially more flooding in Newcastle and the Hunter … so people are being urged to stay at home and to stay on high ground where it’s safe.”

The Bureau of Meteorology (BoM) issued a severe weather warning for damaging winds and surf and heavy rain along the coast from the Illawarra region to the Hunter.

It said an intense low pressure system was centred just off the Hunter coast, near Newcastle.

“This low is expected to remain slow-moving overnight, maintaining vigorous winds, large seas, and periods of heavy rain and thunderstorms,” BoM said in a warning issued just after 11:00pm.

“Conditions are expected to slowly ease during Wednesday as the low weakens.”

An evacuation centre was set up at Dungog High School following reports at least 20 homes had been inundated, but it has since been closed.

However, evacuation centres have been opened at the Senior Citizens Centre in East Maitland and the Shamrock Multipurpose Centre at Ashton Field.

Those using the evacuation centres were asked to bring blankets or sleeping bags, pillows and sleeping mats.