Home > News > A storm, a rescue operation, and melting...

A storm, a rescue operation, and melting footpaths – Your Week in Weather Headlines 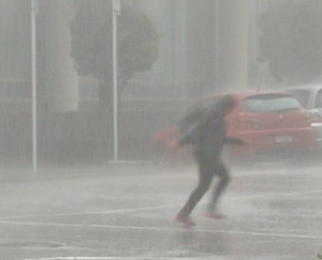 What a crazy week we’ve had! New Zealand’s weather news has been busy enough, with stormy weather, flooding, and nearly 40 people stranded by rough weather in the South Island – but internationally it has been making headlines too…

Let’s start in Sri Lanka, where landslides and heavy flooding have killed at least 73 people in the past fortnight, with scores more missing and hundreds of thousands forced to flee their homes.
Torrential rains have deluged the island nation, triggering huge landslides that have buried victims in up to 15 metres (50 feet) of mud.
In the capital, Colombo, about 243,000 people remained in temporary shelters nationwide at the start of the week.

Meanwhile, staying around the subcontinent, a severe heatwave has set off new records in India, so much so that the roads beneath pedestrians are literally melting like wet cement.
As this footage shows, pedestrians’ footwear can be seen actually sinking into the tarmac as they walk due to how hot it is.
The Indian government has estimated that as much as 25 per cent of the country – 330 million Indians – could be affected by the shortages.

Staying in international news, extreme weather is becoming one of the biggest risks to World Heritage icons like the Polynesian Easter Island or Britain’s Stonehenge, posing a threat to tourism and economies alike, scientists and UN experts say.
Developing countries such as Nepal, home to Mount Everest, and Uganda, where tourists travel to see mountain gorillas, may be particularly hard hit as they rely on income from tourism more than developed countries, the experts said in a report published on Thursday.

A little closer to home, a week in 2016 just isn’t complete without some kind of weather disaster in Australia – and this week it was a wild storm that battered Perth and southwest WA – leaving more than 60,000 customers without power on Sunday night.
Flooded roads caused traffic chaos across Perth while fallen trees have damaged homes and dozens of powerlines have been knocked down.
Wind gusts of above 100km/h were recorded, with 111km/h at Gooseberry Hill in Perth the highest.

Heaviest rain to 9am in Perth area was 40.6mm at Mundaring (Perth 36.4mm). Fast moving showers still moving through pic.twitter.com/d3VmE3WZJL

And back on home soil, this past week has been something of a rough one for parts of New Zealand too, with heavy rain and strong winds hitting Dunedin and coastal Otago on Sunday night, as an offshore low to the east grew and exerted its influence on our weather.

There was a timely reminder for anyone planning tramping or camping trips at this time of year, after a group of 38 people reached warmth and safety on Monday night after a lengthy rescue, when they were trapped by snow during a four wheel drive trip on Central Otago’s Old Man Range.
Otago Lakes-Central Area Commander Inspector Olaf Jensen said the rescue was a great outcome.

By Wednesday that rough weather had moved on – but another huge low pressure system had formed over the country in itts wake – so large it would also engulf the entire country of Australia.
The low created some crazy temperatures in New Zealand on Wednesday morning.
As of 9am it was 16 degrees in Auckland and -4 in parts of Dunedin – a massive 20 degree difference.

We saw some pretty spectacular thunder and lightning in parts of the country as a result of the stormy weather – you can check out the best photos and posts from our readers and social network community, here.

And finally, you can check out your weekend weather outlook, including where the worst of the weather is off to next – with Philip Duncan, here, as well as have your say in this week’s poll, below!