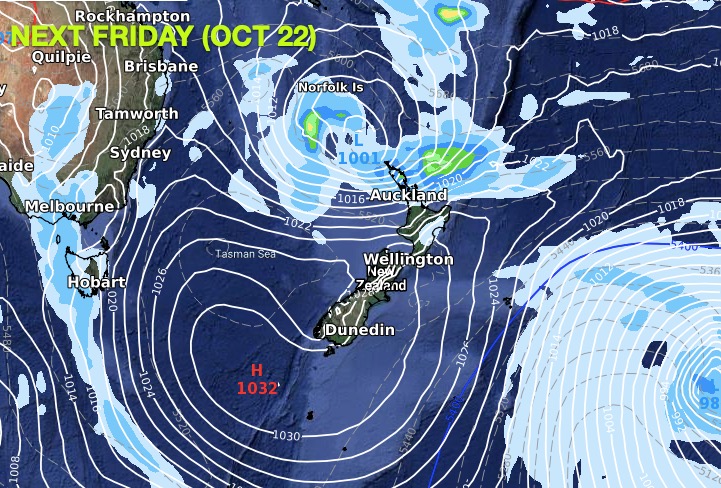 Across 2021 there has been chatter of La Nina forming later this year and while it still hasn’t officially formed locally the sea surface temperatures north of NZ are warmer than average (which is a sign of La Nina).

This warmer sea surface temperature increases the chances of low pressure zones forming north of NZ. But even if storms form up there – or cyclones – NZ is very narrow and can often miss them.

Computer modelling is increasingly confident of a low pressure zone forming north west of NZ next week and drifting our way by next weekend.

It’s not clear cut though – with a powerful high pressure zone likely over the South Island, it may be a battle between the high and low for dominance. This can push the low further away from NZ – but it can also enhance the easterly squash zone.

As for La Nina – Australian scientists at the Bureau of Meteorology (A true Government agency that isn’t aggressively commercial like NIWA has become here in NZ) have issued a La Nina Alert saying La Nina is possible, but their confidence also remains borderline. WeatherWatch monitors the Bureau’s scientific advice for the Australia/NZ region and will bring you more La Nina updates as they develop. Also, our next ClimateWatch update in two weeks time (for November) will also cover the latest chatter about La Nina as we look ahead to summer.

11:39am — NEWS JUST IN: Please note as of today NOAA (America) has said La Nina has arrived and will linger in the months ahead. You can read more about this development here via our partners at CNN.