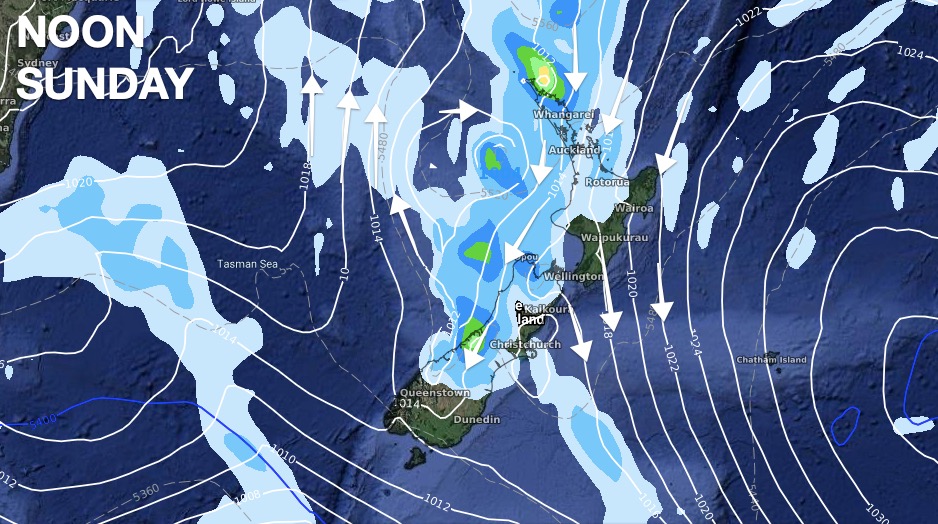 This long weekend has a period of rain moving through with heavy falls in some of our more populated places in the north.

A large high (which is moving into NZ now) will be clearing by this long weekend. Behind the high a fairly weak low in the Tasman Sea area taps into moisture-rich sub-tropical airflows behind the departing high.

The rain band will be slowed down by the slow departing high (a bit like being stuck behind a big truck you can’t overtake). The rain in northern NZ will be patchy with light drizzly falls for some, but for others (like around the Bay of Islands) heavier downpours. Some of these heavier downpours will then slowly track eastwards over the upper North Island as we head towards Queen’s Birthday Monday.

Eastern NZ, like Hawke’s Bay, Canterbury and Otago, are set to be driest. Great news for the Canterbury clean up – not great news for those in Hawke’s Bay needing rain. There will be a little bit of rain – but not much at this stage. Keep an eye on our rainfall totals at WeatherWatch and RuralWeather – they are updated every hour.

The north to north east flow will keep many places mild for winter too. This same airflow will bring in windy north to nor-easters between the departing high and incoming low (the squash zone) will blow down across NZ this weekend.

You can keep up to date with any current MetService warnings or watches right here at WeatherWatch.

Use RuralWeather.co.nz and the hourly forecasts at WeatherWatch.co.nz to plan your long weekend and see hourly and daily rainfall totals, whether you’re staying home or heading across Aotearoa.

HOW MUCH RAIN IS COMING BETWEEN NOW AND MIDNIGHT MONDAY?