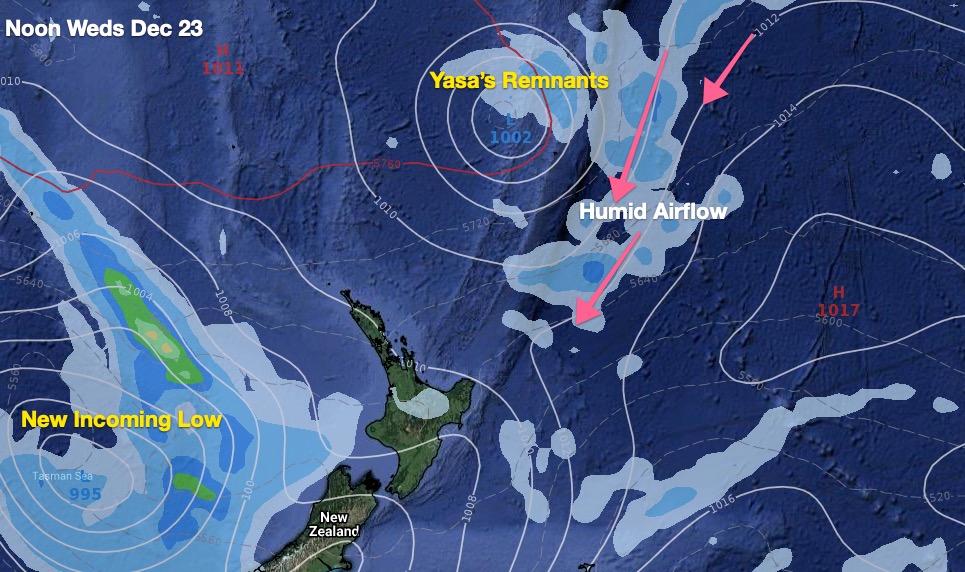 The rainy remnants of what was Cyclone Yasa will get quite close to NZ on Wednesday – but fail to reach here due to so much high pressure in the north. While this is positive news for many people busy in the lead up to Christmas it’s not good news for farmers, growers, those on rain water and for the Auckland storage dams.

In fact, the failure of this rain event may now undo long range forecasts that suggested normal rainfall would return mid to late December. Now Auckland, along with Waikato, Bay of Plenty, Coromandel Peninsula and Northland may all be looking at a much drier than usual December despite La Nina being here.

WeatherWatch.co.nz has been saying for months now that this La Nina in particular looked moderate and short lived, meaning it may not have the oomph to really bring in the rain to NZ. That it was a silver lining for dry regions – but not the silver bullet to fix it.

High pressure has dominated New Zealand for two full years now with little information from climate scientists at Government Agency, NIWA, about why. Incredibly, NIWA is currently busy commercially weather forecasting up against MetService for the America’s Cup… the days of climate science being thoroughly discussed via Government Agencies is fading fast in New Zealand. It’s been the biggest disappointment of the past decade to see tax funded NIWA give up on working on explaining daily climate challenges and instead work to solely commercially compete against MetService. It’s Government agency vs Government agency for the benefit of a rich few at the top.

WeatherWatch.co.nz will continue to track the rainmakers and use scientific information and the best science advice from the Bureau of Meteorology out of Australia and of course the data we have.

Interestingly – and perhaps incredibly (considering the Government owns two forecasting agencies now) – an independent Government review a few months ago just concluded that WeatherWatch.co.nz was New Zealand’s most accurate rain forecaster. The review was undertaken by the Department of Conservation.

To see your upcoming rainfall figures locally please refer to the daily and hourly rainfall totals at WeatherWatch, or drill down even deeper with the rain data at www.RuralWeather.co.nz.

What the… I’ve ‘clicked on weather watch for years now satisfied in the knowledge that I will get a simple fact-based weather forecast. What do I get this time? A. A bloody party political broadcast interspersed with self-advertising and critique of other businesses. Stick to what you’re ‘sposed to be doing…delivering the weather forecast.

Hi there.
1) – We’ve been a weather news website for over 12 years.
2) – The Commerce Commission launched an investigation last year due to the way Niwa has been treating us and that investigation is still on going http://www.stuff.co.nz/business/116203356/commerce-commission-investigating-niwa-and-metservice
3) – Niwa is a Government Agency and has been criticised widely for competing against another Government agency (MetService) and creating a tax owned double up. https://www.rnz.co.nz/programmes/the-detail/story/2018719905/funding-two-bodies-to-produce-the-same-weather-forecast

You may not enjoy hearing about these issues – but their anticompetitive behaviour is the single biggest obstacle we face every day simply trying to survive and provide you with an entirely free service.

Have a good Christmas,
Philip Duncan.

Great comments Phil – I also have asked NIWA why we have such consistant bands of high pressure rolling across from West to East but they have not given any explanation.
This year has been very dry, 21mm for December and 905mm for the year in Whenuapai, the next month (and seasonally the next three months) look to be very dry, our hope is to get a sub-tropical low bouncing out of Queensland who at least are getting the benefits of La Nina.
I also refer to BOM and quite often see NIWA virtually quoting BOM about 4 or 5 days later if there are any fluctuations to our weather – and I also find NIWA’s forecasts to be the least accurate of all of the weather forecasters.

Hi Phil C,
Thanks for the support and understanding. It’s just frustrating that NIWA is choosing to be so commercial now. As a Crown Research Institute working for all New Zealanders their focus on commercial opportunities to compete against another Government Agency doing the same job already is misguided in our view – and it’s also not helping the general public as demonstrated so well abroad, such as Australia, UK, USA, Japan, Canada etc. As a tax owned Government Agency we’d love to see NIWA engaging with the private weather sector in NZ to discuss matters of climate – such as La Nina, developing droughts etc, in a friendly helpful way. We hope the Commerce Commission can open the door to some changes.
Cheers and have a good Christmas,
Phil Duncan