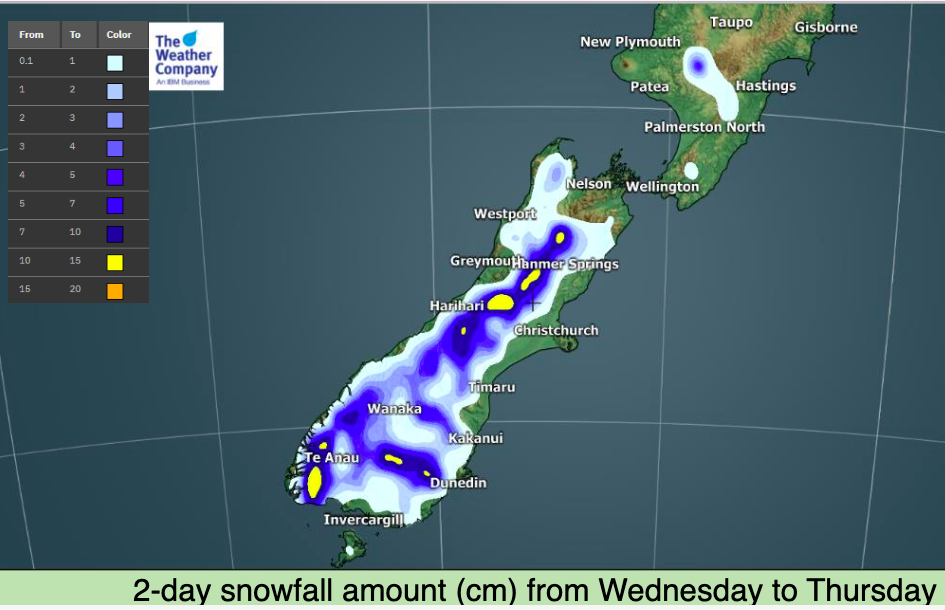 The cold front may already be clearing parts of NZ but the coldest weather won’t peak in some places for another day or so.

The wintry air has already started to arrive in the South Island and will peak in the North Island over Thursday and Friday, but won’t be as cold further north as last week’s polar blast was.

WIND CHILL:
Temperatures have already dropped in the South Island, Dunedin’s daytime high is +6C for the next four days in a row, warming up to +7C by Sunday. The windchill in Dunedin is currently -1C (as of 7:45am) and ‘warms up’ to 0C by Noon.

As WeatherWatch.co.nz reported yesterday, Dunedin’s windchill will hover between 0C and -3C continuously until almost noon on Sunday, when it finally climbs up to +1C.

Across Southland windchill of -2 and -3 is fairly consistent over the coming days but may warm up a little to +3C at times due to wind flows shifting around.

Christchurch isn’t quite so cold but still drops down to a windchill of -3C at times overnight, but by day should be closer to around +5 to +7C, considerably milder than Dunedin.

The North Island’s coldest spot in the days ahead will be Waiouru, Ohakune and National Park/Central Plateau. The windchill here will be mostly below zero from Thursday to Saturday with air temperatures climbing to a maximum of about +4 or +5C from tomorrow. Snow flurries are possible in this region and on the Desert Road, although accumulation doesn’t look too extreme.

SNOW:
Snow flurries are forecast across the lower South Island down to 300m in Otago and Southland, 400m in South Canterbury and 700m in North Canterbury today.

In Southland and Otago, depending on various squally showers, there may be snow flurries that go lower to 100 or 200m, but are far less likely to settle and are perhaps most likely overnight when temperatures drop further.

Check your local WeatherWatch.co.nz or RuralWeather.co.nz forecast – if snow if highly likely a snow symbol/icon will appear in your forecast, otherwise the usual wintry showers should be expected.

Snow totals over the remainder of Wednesday and Thursday aren’t especially high, with perhaps only a further 15cm likely on the mountain summits now that the main front has gone through.

RAIN:
The bulk of the rain today is already clearing out to the east of the North Island, but our most eastern regions will still get some heavy falls as the front moves through, mostly around the East Cape and Gisborne ranges and surrounding areas, like eastern Bay of Plenty.

METSERVICE WARNINGS:
Can all now be found LIVE on the WeatherWatch website by tapping/clicking here.

CONCLUSION:
This event isn’t as significant as the polar blast NZ had last week, but for Southland, Otago, Canterbury high country and the North Island’s Central Plateau the cold, wintry, airflow may linger longer – not really easing and warming up a little until the weekend arrives.

Snow flurries will likely impact some highways and windchill will be very tough for newborn lambs, along with showers/damp conditions – especially in Southland and coastal Otago.

WIND CHILL CALCULATOR:
Can be found for every single part of NZ, hourly, at RuralWeather.co.nz (click on the Temps tab at the top of the page).