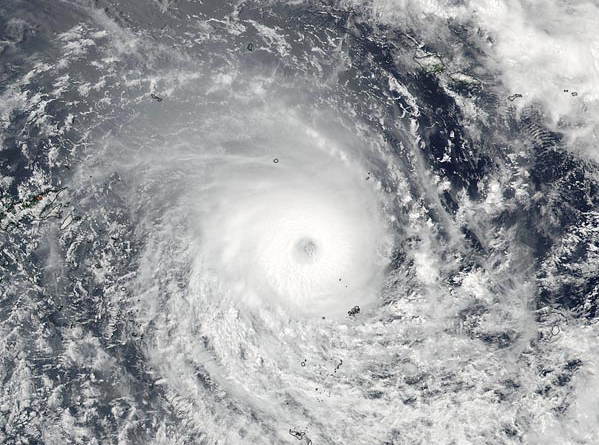 There’s trouble in paradise. The strongest storm ever to threaten the South Pacific island of Fiji, Category 5 Tropical Cyclone Winston, is poised to make a direct hit on the island nation on Saturday night/overnight tonight.

Winston’s formidable winds of 233 km/h (with gusts well over 300km/h) are not expected to change much before then, and when the storm makes its expected landfall on Fiji’s main island, Viti Levu, at approximately 1200 UTC (7 am EST) Saturday, the Joint Typhoon Warning Center (JTWC) expects that Winston will be Fiji’s strongest tropical cyclone on record: a Category 5 storm with sustained winds of 240km/h.

At 10 am EST Friday, winds at Vanua Balavu Island, which was in the western eyewall of Winston, were sustained at 46 mph, gusting to 103 mph (165 km/h). Winston’s central pressure was estimated at 925 mb at 8:11 am EST Friday by the Fiji Meteorological Service.

On Friday morning, Winston was in a nearly ideal environment for intensification, with wind shear a low 5 – 10 knots, excellent upper-level outflow channels to both the north and the south, and sea surface temperatures (SSTs) near 30.5Â°C (87Â°F).

These SSTs are about 1 – 1.5Â°C (1.8 – 2.7Â°F) above average. Unusually warm waters extend to great depth, giving Winston a high Tropical Cyclone Heat Potential (TCHP) in excess of 75 kJ/cm^2, a value which is often associated with rapid intensification. Satellite imagery on Friday morning showed that Winston had a large area of heavy thunderstorms concentrated in a donut shape around a 18-mile diameter eye, with very few outer spiral bands. This structure may qualify Winston as an “annular” hurricane–a special subclass of hurricanes which are more resistant to weakening than regular hurricanes. With such an annular structure, and with SSTs that will warm to 31Â°C (88Â°F) as Winston moves closer to Fiji, the storm should be able to maintain its Category 5 intensity until landfall.

Fiji’s tropical cyclone history (*PLEASE NOTE – this is American written, the Category system they reference is broader than our South Pacific system, so Cat4 Evan was Cat5 locally, etc)

Category 4 Tropical Cyclone Evan of December 17, 2012 walloped Fiji with sustained winds of 135 mph, as the storm’s southern eyewall–the most intense part of the storm–brought hurricane conditions to a long stretch of the north and west coasts of Fiji’s main island, Viti Levu. According to a database maintained by NOAA’s Coastal Service Center, Evan was the strongest tropical cyclone on record to affect Fiji’s main island, with records going back to 1941 (however, accurate satellite records extend back to only about 1990.) Evan did $109 million in damage (2012 dollars) to Fiji, making it the second most destructive storm in their history. The most devastating cyclone to affect Fiji in recent decades was Category 2 Cyclone Kina of January 1993, which killed 23 people and did $100 million in damage (1993 dollars.) The only deadlier storm than Kina was Category 3 Cyclone Eric of 1985, which made a direct hit on the capital of Suva, killing 25.

Tracks of all Category 1 and stronger tropical cyclones to pass within 100 miles of Fiji’s main island of Viti Levu since 1941. Evan of 2012 (Category 4 with 135 mph winds) was the strongest cyclone on record to affect Fiji, but Winston of 2016 is stronger. Image credit: NOAA’s Coastal Service Center.

Figure 4. Radar image from the Fiji weather service showing the large eye of Tropical Cyclone Evan just north of Fiji at 2:50 pm local time (02:50 UTC) on Monday, December 17, 2012. At the time, the city of Nadi was in the southern eyewall of Evan, and recorded sustained winds of 52 mph, gusting to 104 mph. Sustained winds at Nadi increased to 69 mph three hours later.