Will the predicted cyclones bring rain to New Zealand? 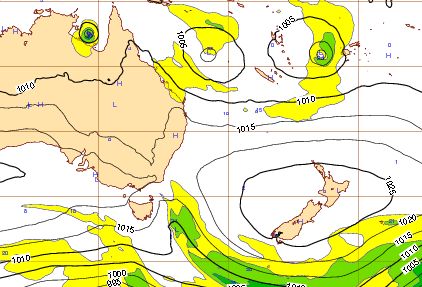 WeatherWatch.co.nz has noticed a significant step up in questions from those in the North Island desperate for rain as conditions continue to dry out.

While a few showers have peppered parts of the upper North Island in recent weeks there are large pockets of very dry conditions within Northland, Auckland, Waikato and Bay of Plenty especially.

This week the energy is east of the country – a low east of Canterbury and an ex-cyclone dropping southwards well east of us, near the international date line.

A large high in the Tasman Sea looks set to move in and bring sunnier, calmer and warmer weather to much of the country by this weekend.

This large high will effectively close down any rain chances from the Southern Ocean and Tasman Sea for northern New Zealand.

However next week two new pressure systems are expected to develop north of New Zealand and New Caledonia – one north west of us and the other directly north.  While they might not drop south there is a window of opportunity in week 3 of March that one of thse lows could drop south.

But it’s a big “could” at this early stage.  We can’t lock in any rain just yet and certainly we see little in the way of rain for northern New Zealand in the next 10 days.

As first mentioned by WeatherWatch.co.nz back in September 2013, the fairly neutral weather pattern we have at the moment makes rain makers for northern New Zealand more difficult in the first quarter of 2013 – unless it’s coming from the tropics or sub-tropics – and right now the only life there is so far north of New Zealand it’s barely featuring on our current Australasian satellite maps.  That might change later in the month.  We’ll keep you posted with the latest.

– Image / Three tropical lows (all might be tropical cylones at some point) well north of NZ next Thursday March 13th.

conditions in the Manawatu region are almost identical to this time last year. The rainfall total for the period Nov 1st 2013 to Feb 28th 2014 is 1.8mm less for the same period a year ago. the signs in the country and in the city are almost the same for the area starting in Wellington & up the Kapiti Coast right through to the higher country of the northern Manawatu. By mid March it would be hard not to declare this region a drought zone.