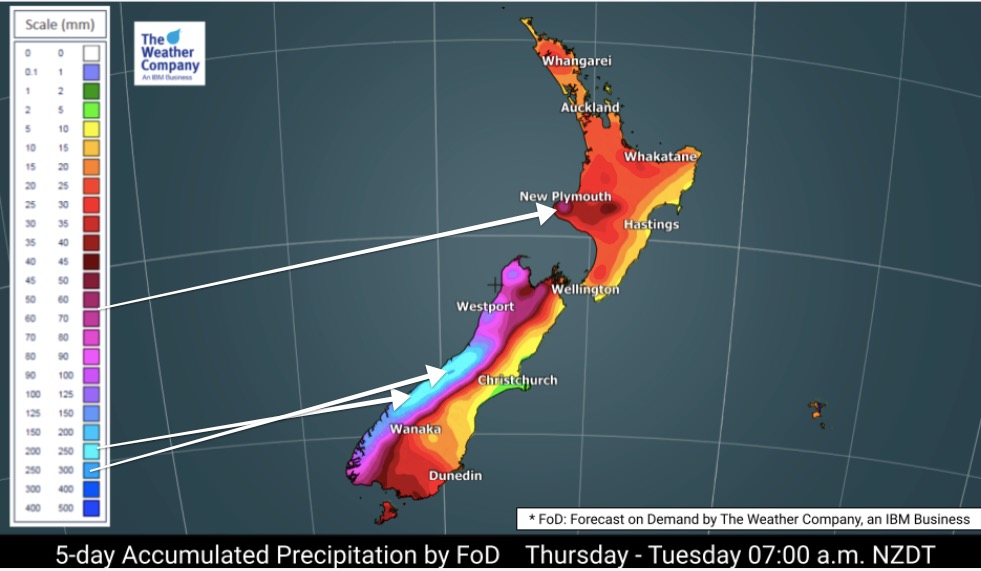 Parts of NZ will be over 8 degrees above normal today while heavy rain develops on the West Coast with over 300mm possible in the coming days.

For the West Coast rain develops tonight with some heavy falls, then sets in across Friday, Saturday and Sunday. The airflow is coming out of the sub-tropics and with La Nina that gives it that extra energy to fall as heavier rain. Totals across the mid section of the West Coast are expected to exceed 300mm in the coming days while surrounding areas have over 250mm.

This rain is heavy enough to cause slips, flooding and even road closures. On Sunday there is another burst of rain as a cold front out of the Southern Ocean combines with the sub-tropical flow. This means the West Coast has a heavy rain event starting from tonight and not easing until Sunday night… potentially 72 hours of heavy rain.

MetService already has a severe weather watch in force, indicating a rain warning is imminent. You can now view ALL MetService warnings LIVE here at WeatherWatch.co.nz: www.weatherwatch.co.nz/maps-radars/warnings/metservice – we thank them for providing the service.

NATIONWIDE WARMTH TODAY
La Nina helps increase overnight temperatures with more cloud cover, more northerlies, higher humidity. But this set up can also limit how hot the day can be, so many places in the north – like Auckland – may have plenty of warm days but not what you’d describe as “overly hot” – due to it being cloudy a lot more. However further south the mountains and ranges strip away more of the cloud and leave more of the heat.

In La Nina summers we often see the interior and south of both main islands leaning much warmer than usual – while many eastern and northern coastal areas are closer to normal by day (and warmer than normal by night).

As you can see, most of NZ leans warmer than average today – but the South Island’s interior goes over 8 degrees above normal for this time of year, while Auckland City is only a few degrees warmer and Hawke’s Bay and Gisborne, along with Christchurch, have normal daytime temperatures for this time of year. It’s very easy to simply say “all of NZ will be hot” but when you look closer at the details, many populated places are closer to normal than the big extremes, due to cloud cover limiting the daytime heat.

LA NINA COPY AND PASTE
Mainstream media outlets oddly don’t compete with weather news anymore – they mostly all just copy and paste the exact same Government Agency headlines from Niwa, which gives these big news outlets all the same general headlines and same news stories (in our view it’s a bit weird they ask you to financially help support them copy and paste public media releases like that).

La Nina isn’t as simple as just saying we’re in for a hot summer – as we explained in the story above a La Nina summer isn’t always “hot” for everyone, some have a lot of cloud and gloom. Yesterday The Herald described Auckland’s upcoming summer as “unusually hot” while Stuff also said “hot summer on the cards” in their headline. Yes it will be warmer than average, and some will have very hot weather, but that should be balanced by saying many people may not agree to describe it as “unusually hot” to be having daytime highs only a few degrees higher than your overnight lows with thick cloud cover and drizzle.

It’s not as simple as copying and pasting a Government Agency media release. Work has to be done to break it down. We think it’s odd all the mainstream media outlets quote the same Government Agency and lack challenging them on any level.

For NZ’s only independent summer outlook (what separates us from the mainstream ‘copy and paste’ weather news) please see our latest ClimateWatch Summer Outlook. Our InfoGraphics and Maps paint the picture, as does the news story and our special video.

Thanks for supporting the private sector by supporting NZ’s largest private weather forecaster – it makes us even hungrier to do even better in 2022.