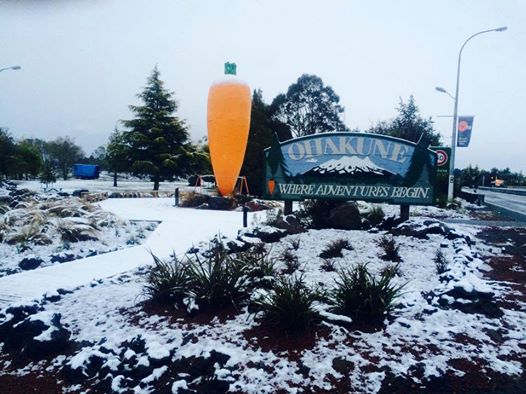 We’ve seen the end of a week that started off very chilly, and wound up a bit calmer – though the prevailing pattern of 2015’s weather has certainly been broken!

Snow was the big story to kick the week off – as we saw some positively icy temperatures in the South Island on Monday, before the cold front then moved across the North Island to cause some havoc up there.
Both islands got a dusting of some pretty rare April snow, with some pretty spectacular pictures coming through from the South Island early in the day – like this from our Facebook friend Carlene in Christchurch:

The cool conditions were a hassle for some, a novelty for others and a bit of a nuisance for driver in places – with a handful of roads closed or put under restrictions due to the icy conditions.
We had some amazing photos come in from readers around the country – including this from Ohakune resident Victoria Dreyer:

It’s not often you see snow on the big carrot in April! Check out the rest of those photos, here – or have a look at some of the best of April’s photo submissions in our other reader gallery, here.

Heading across the ditch to Australia now, where farmers received mixed weather related news this week – the first announcement coming on Wednesday.
Drought-affected towns in Queensland and New South Wales are set to receive an injection of funds that will aim to boost their lagging economies, as part of the Federal Government’s special drought assistance package.
The scheme will target rural communities entering their third year of drought, and will fund shovel-ready projects to ensure people can stay in the community.
Drought-affected communities and local councils have welcomed the plan, after three years of dismal rainfall levels in parts of both states.

In other farming related news, the Bureau of Meteorology in Australia released its latest seasonal outlook this week, saying that there is now a 70% chance of El NiÃ±o developing later in the year.

El NiÃ±o usually leads to below average rainfall – meaning drought affected farmers in the South Pacific will not be pleased with the outlook – although the BoM also predicts a wetter few months ahead of the weather pattern taking hold.
The BoM also said in a statement that El NiÃ±o systems don’t necessarily mean lower rainfall either, citing the relatively mild 1997-1998 El NiÃ±o impact on Australia.

Don’t forget to check out your weekend outlook with Philip Duncan’s latest weather video, here – or have a look at the situation as it stands for Saturday, here.
As always, from everyone here at WeatherWatch, thanks so much for your contributions both here on the site, as well as on our social networking platforms – we love hearing from you guys and seeing the awesome photos from around New Zealand!