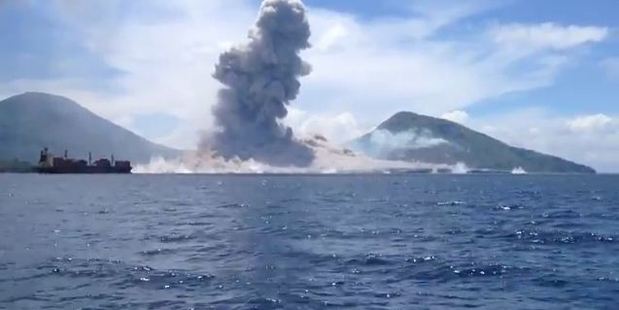 As the political scene hots up around the country, the temperatures have been slowly climbing a little too – thanks to a nor-westerly airflow dominating the weather this week. Around the world it’s been a rare week with no major weather events, but we’ve had plenty to talk about both home and abroad…

We start off stateside, where it’s been a boom year for California’s water drillers, as a third of America’s most populous state bakes in what the US Geological Survey calls an “exceptional drought”.
This is the most severe rating, and as such, drillers are being kept busy as farmers and small communities tap deeper into groundwater. Check out the full story, here.

A little closer to home, and this week some incredible footage of a volcanic eruption in Papua New Guinea came to light, ending a powerful shockwave rippling through the clouds above it.
Philip McNamara was on a boat off the coast of Papua New Guinea filming Mount Tavurvu in the distance when the volcano exploded, sending up a plume of ash and smoke.

So far this year has seen plenty of weather action around New Zealand – most of it bad – as a new insurance industry reports show insurance claims for weather related damage have soared in the first eight months of the year, with the cost around $135.4m.
Severe weather has made it ‘one the most expensive years’ for insurance payouts, according to the report.

One of the more recent recipients of some of that extreme weather, Northland, has been in the headlines recently due to the extraordinary levels of rain in the past month.
Because of the high soil moisture levels, Northland dairy farmers are being told to keep their cows off pastures to avoid further damage.
DairyNZ Northland Regional Leader, Tafi Manjala says leaving stock on these pastures for too long can cause pugging.

In conservation and environment news, two stories this week highlighted the good work being done by New Zealanders in protecting our native plant and animal species.

The Hauraki Gulf is getting a makeover – with the Revive our Gulf Trust laying around three and a half million mussels in beds in the harbour – as they attempt to bring back an important environmental cleaner.
And this week marks the 50th anniversary of conservationist Don Merton’s work in protecting Maria Island from pests and predators.

Ski field operators have described the 2014 season as ‘a topsy-turvy ride’, after rain and warm weather doomed the start of the ski season to one of the worst beginnings in nearly a decade.
After the initial glitch, however, most snow bunnies were treated to a great season.

This week also saw the final ‘supermoon’ of 2014 in New Zealand skies – remember, if you have any pictures you’d like us to share, head here and flick them to us – we’ll make sure they all get up on the site!

Remember to check out Philip Duncan’s latest weather video, too – with rain on the way for most kiwis this weekend…