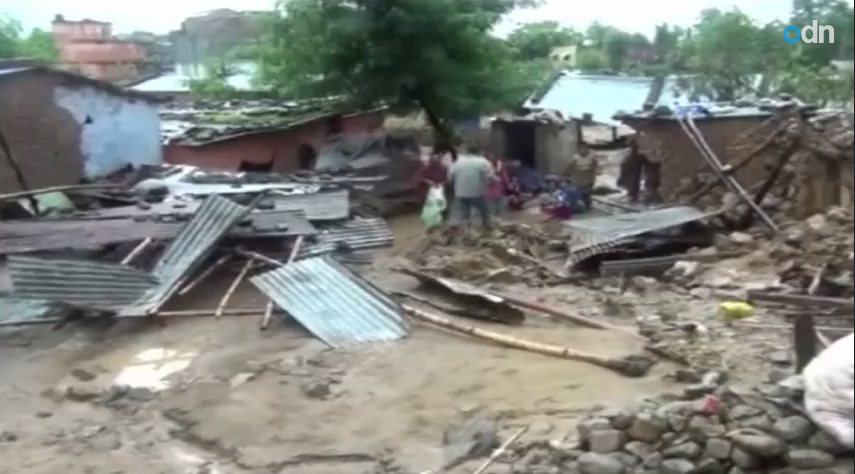 Another very busy week around the weather world, with landslides, earthquakes, snowstorms and droughts dominating our headlines here on WeatherWatch.com.

We’ll start in Nepal, where a landslide, triggered by torrential monsoon rains and flooding, claimed the lives of nearly 200 people in the mountains bordering India on Monday.
The downpours have also displaced thousands in the scenic Himalayan region and revived memories of a deadly deluge last year that killed more than 5000 people in the Indian state of Uttarakhand.

Monday was also a bad day for many in Iran, where a powerful earthquake, measuring 6.2 on the richter scale, struck in the early hours of Monday morning, injuring at least 250 people in a region near the border with Iraq.
Local authorities said the quake caused widespread destruction in rural areas.
The 6.2-magnitude earthquake hit at a depth of around 10 kilometers (6 miles) in an area 36 kilometers southeast of the Iranian city of Abdanan, the U.S. Geological Survey said. It was followed by a series of aftershocks.
Thankfully, there were no reports of any deaths.

Over in Japan, a series of deadly landslides were caused by heavy rains in the city of Hiroshima on Wednesday, killing nearly 20 people, including rescue workers.
The landslides happened in the city’s Asaminami and Asakita wards between 3:20 and 4 a.m. local time Wednesday.

In Iceland, another volcano is showing signs of life after a series of earthquakes and what scientists are calling “increased geological activity” could be a trigger for a second eruption in less than 4 years.
In 2010, Icelandic volcano Eyjafjallajokull spewed an ash cloud into the skies that disrupted travel for millions of passengers and cost airlines a small fortune.
Now another Icelandic volcano — Bardarbunga — is rumbling, prompting fears of a repeat of the travel chaos that afflicted northern Europe when the Eyjafjallajokull volcano did its worst.

Closer to home, and it may not be dominating the mainstream news headlines at the moment, but ongoing drought conditions are causing a huge problem across the Tasman, particularly in parts of rural Queensland still recovering from last years flooding.
Ex-Tropical Cyclone Oswald dumped torrential rain across much of Queensland in January 2013, flooding 140,000 hectares of land in the Condamine Catchment.
The bill for damages to fisheries and agriculture on the Darling Downs and in south west Queensland has been put at $120 million, but just a fraction of that has been allocated by Government to fix it, with the onus falling on landholders.

Back on the home front, and it’s no surprise to learn that after an eventful weather year for the country, our insurers seem to be coming away with some fairly healthy profits.
The parent company of New Zealand’s biggest insurer pushed up profits 10.6 per cent from last year’s A$1.43 billion to make A$1.58 billion in the year to June 30, 2014.
Insurance Australia Group (IAG) owns some of this country’s biggest insurance brands including State Insurance, NZI, Lumley Insurance and AMI.
“The result was achieved in a year that saw IAG in New Zealand actively supporting its customers through increased incidence of major weather events including:

â€¢ storms in September 2013 where damage was concentrated mainly around the Canterbury region;

â€¢ ex-Tropical Cyclone Ita which caused damage across the country in April 2014; and

Rotorua had its fair share of filthy weather this week too, after wet weather caused road and school closures, a serious crash and power outages on Thursday – with locals facing a daunting cleanup task heading into the weekend.
Mayor Steve Chadwick says people should pay particular attention to how their roof and drainage held up to the severe weather, and check if repairs are needed.

Speaking of the weekend, you can check out the latest forecast for your region here (spoiler alert: it’s looking fine!), and remember – we get a TON of correspondence from people both here and abroad about meteors they’ve seen in the night sky – we love hearing about them, so if you see anything, or (even better) manage to get a snap of something among the stars, head here to our meteor page!