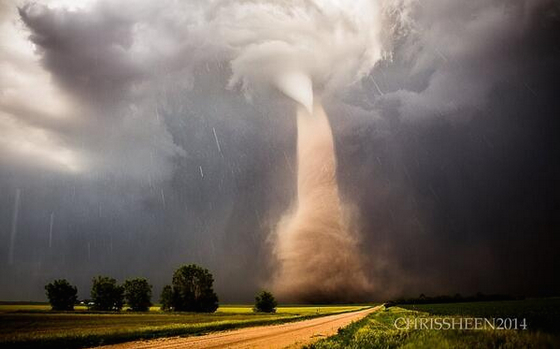 Another huge week around the weather world, with tornados, exploding stars, and things that go ‘bang’ in the middle of the night…

We start across the Tasman, however, in Australia – where farmers have been warned this week about the likely impact of an El NiÃ±o weather system on the country’s climate patterns in the coming months.
An El Nino event refers to a prolonged period of warmer-than-average sea surface temperatures in the eastern Pacific that can lead to drought in Australia.
Climatologist Roger Stone is warning Australia should brace itself for drier conditions as an El Nino weather pattern looks increasingly likely.
“Exactly how that manifests itself over the next couple of weeks will be critical to not only Australia’s climate patterns but climate patterns all over the world,” Professor Stone told Landline.

In the USA, all eyes were on the Midwest again this week, as a pair of deadly and spectacular tornadoes swept through rural Nebraska, leaving dozens injured and claiming the life of a child.
The National Weather Service said at least two twisters touched down within 1.5km of each other.
Emergency crews and residents spent the evening sorting through demolished homes and businesses in the town of about 350, roughly 160km northwest of Omaha.
“More than half of the town is gone – absolutely gone,” Stanton County Commissioner Jerry Weatherholt said. “The co-op is gone, the grain bins are gone, and it looks like almost every house in town has some damage. It’s a complete mess.”

Staying in the USA, and an Indianapolis man thought he had made it through a noisy thunderstorm unharmed, only to find his car a smouldering mess in the street outside his house on Thursday.
A bolt of lightning struck a car on the 7200 block of Fields Way on the southeast side of Indianapolis early Thursday, the owner told FOX59 News. Check out the amazing pictures, here.

Staying in the night skies, and NASA has released a stunning timelapse video, taken over 5 long years, showing the dramatic and spectacular collapse of a dying star.
V838 Monocerotis (V838 Mon) is a red variable star in the constellation Monoceros about 20,000 light years from the Sun.
The previously unknown star was observed in early 2002 experiencing a major outburst, and was possibly one of the largest known stars for a short period following the outburst. Check out the video, here.

In lighter news, North Korean premier Kim Jong Un was in the headlines again this week – this time threatening his national weather service to ‘get it right – or else’.
Apparently the North Korean leader has been touring meteorological facilities in his country complaining that there are “too many incorrect” weather forecasts.
As further proof of the supreme leader’s extreme displeasure, the Rodong Sinmun report includes photos of a red-faced Kim chastising what appear to be sheepish meteorological personnel. Watch CNN’s story, here.

Back on home soil again, and a mystery ‘banging, rumbling’ sound was reported across Auckland city on Wednesday night – a phenomenon which has weather analysts and geologists scratching their heads.
About 4pm, Auckland residents from Piha in the west to Whangaparaoa in the north-east reported hearing and feeling large thumps, bangs or shocks.
But emergency services received no reports of damages.
“It’s a mystery, more than anything,” a Fire Service spokesman said.

And finally, get the good oil on your weekend with Philip Duncan’s latest weather forecast – hint: it’s cold and getting colder!