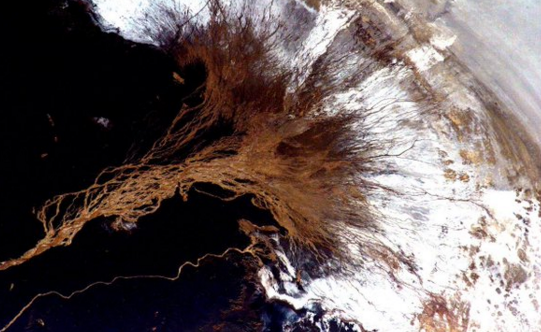 Winston has been the word on everybody’s lips this week, as the Tropical Cyclone inches its way down through the South Pacific Ocean towards Tonga – while it remains to be seen just how much of an impact it will have on the country.

We started the week looking at things from a slightly wider vantage point, however, with astronaut Scott Kelly saying that the Earth’s atmosphere “looks very, very fragile” and “like something that we need to take care of.“
During his time at the space station, Kelly has remained active on social media and often shares his unique perspective of the planet by posting photos.
Because of his spectacularly encompassing vantage point, Gupta asked Kelly how he would define the Earth’s condition if it were a human body.

Staying with climate news, and about 150,000 penguins have died since being stranded by a vast iceberg that became lodged off the coast of Antarctica six years ago, according to the journal Antarctic Science.
The iceberg essentially has landlocked the penguins, forcing the animals to trek across a desolate stretch of nearly 40 miles to find food.

Meanwhile, back on solid land, things were moving around a bit underfoot in Canterbury, as a damaging magnitude 5.7 earthquake struck Christchurch on Sunday afternoon NZT.
Geonet said the quake hit at 1.13pm.
The severe earthquake was followed by another, moderate quake with a 3.5km magnitude at 1.17pm, 10km north-east of the city.

Summer keeps getting weirder in Tasmania, as after weeks of warm and dry weather, there has been a sprinkling of snow in the state’s Great Lakes district and on Hobart’s Mount Wellington.
The temperature dipped to zero at Liawenee in the Central Highlands overnight, with light rain turning to snow early Wednesday morning.

Meanwhile, on the other side of the country, things couldn’t be hotter, as the hottest temperature on earth on Thursday occurred at Onslow Airport, Western Australia at a steamy 47 degrees.
The highest temperature in the southern hemisphere ever recorded was in the South Australian town of Oodnadatta in 1960, at a whopping 50.7 degrees.

Onslow Airport was the hottest place IN THE WORLD during the last 24 hours. Well done, you! Treat yourselves to an icy pole & a saline drip.

Pakistan doesn’t often make our weather headlines, but the country’s Tharparkar district is entering its third straight year of drought, with nearly 200 deaths since January, many of them children.
Check out Ashraf Ali’s report for the ABC, here.

Meanwhile, on home soil, things have been getting wet – as heavy rain in some parts of the country has led to localised flooding through the week, and cyclone Winston approaches the country from our northeast.
We’ve been watching Winston for more than a week now, and though it appears to be tracking away from New Zealand, we may see some residual effects on our shores next week.
Tonga, however, doesn’t look so lucky – as villagers in the northern islands were hunkering down on Friday afternoon in churches, and hoteliers were boarding up buildings as Cyclone Winston threatened to pack winds of up to 250km/h.
Check out the latest on Winston, here.

Don’t forget to check out what the rest of your weekend has in store, here, as well as voting in this week’s poll (about cyclones) below!