Home > News > Week ahead mostly dominated by a westerl...

Week ahead mostly dominated by a westerly airflow 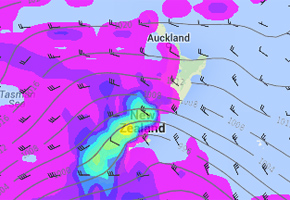 This week looks mostly to be dominated by a westerly airflow, much like last week. Although the airflow will likely be not as strong and eastern regions temperatures are not likely to reach as high as they have recently, still, a few warm days ahead look likely.

For todayâ€™s weather, as usual check out this mornings national forecast here.

On Tuesday the North Island does quite well weather wise, most regions are looking mostly sunny under a gentle southwesterly airflow. About western Waikato through to western parts of Northland there may be the odd shower trickle in at times
from afternoon. Over the South Island expect an increasing northwesterly airflow
ahead of a front which moves onto the lower South Island later in the
day.

Eastern regions of the South Island and about Nelson are mostly
sunny, some high cloud later in the day. Cloud increases along the West Coast
with areas of rain moving north during the day, rain moves into Southland and
Otago in the evening with some snow to 800m at first then lowering to 600m
overnight. Snow lowers to 400m overnight about Southland.

Tuesdayâ€™s late evening front moves quickly up the country during Wednesday, weakening as it
does. Brief early showers clear about the upper South Island for most then sunny
areas increase, northwesterlies freshen from evening with cloud and showers
moving into North Westland however. For the North Island most places see a few
showers developing mid to late morning as this front passes over then clearing
early afternoon with sunny areas developing with westerlies changing southwest.
About the lower South Island northwesterlies strengthen from morning with
increasing high cloud in the east and about Southland, rain for South Westland.

On Thursday expect freshening westerlies for all of the North
Island, showers for most in the west especially afternoon onwards including
Wellington. Generally drier out east with late high cloud, warm temperatures.
Gale northwesterly winds are looking fairly likely about Cook Strait from
afternoon, overnight winds change westerly. For the upper South Island, expect
strong northwesterly winds to develop in the east from late morning then
changing west to southwest late afternoon or evening bringing some cloud and the
chance of a shower or two, mainly near the coast. Rain along the West Coast with
heavy falls and thunderstorms possible, easing in the evening as winds change
southwest.

For the lower South Island on Thursday, morning rain on the
West Coast heavy at times with thunderstorms then easing to showers early
afternoon as northwesterlies change southwest. West to southwest winds freshen
about Southland and Otago during the morning / early afternoon bringing cold
temperatures and the odd shower, showers more frequent about Southland.
Overnight winds tend more southwest bringing a greater chance of showers about
the lower South Island this time with a risk of hail, sleet and a chance of snow
flurries to sea level.

On Friday showers ease for most across the country
and gradually clear with sunny spells breaking though, cold temperatures are
likely for many. Keep an eye on news stories this coming week about potential
snow for the lower South Island this coming Thursday night / early Friday.

The air is certainly cold enough for sea level snow overnight Thursday / Friday morning but with Stewart Island being there it often diverts snow to the west and east of the city in a southwesterly airflow. Inland areas will likely get snow to low levels starting Thursday afternoon / evening then through till Friday morning.

Thanks for the update weather watch. Metservice is forecasting heavy snow for the inland canterbury high country for Thursday/friday, is heavy snow looking likely in your predictions?

We are not suspecting inland Canterbury at this stage. The really cold air arrives over Canterbury on Friday but due to the wind direction being quite SW we are thinking mainly Banks Peninsula will be in the firing line once again. It’s not to say there may be a period of flurries move through during Friday for a time but moisture levels are not looking too high at this stage for inland areas.