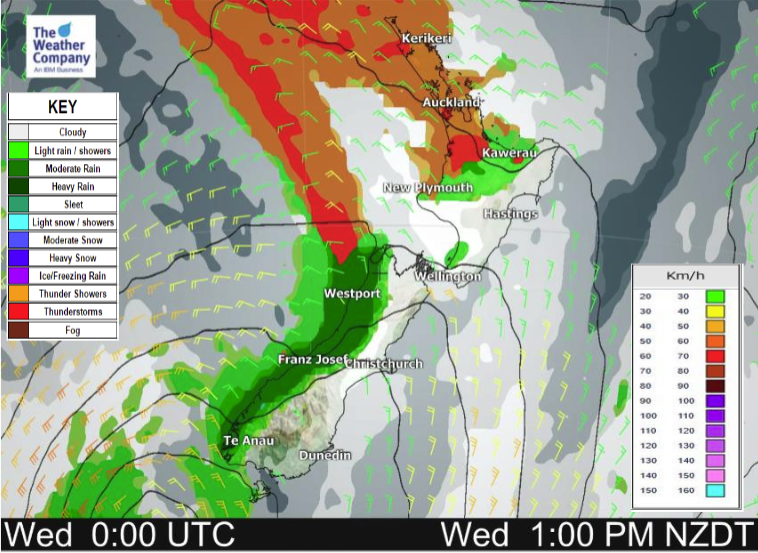 A front pushes northwards over the South Island today, northwesterlies for the North Island.

Expect some rain or shower activity for western regions, mainly dry out east however Southland and perhaps Otago could see some precipitation.

Temperatures in the early to mid twenties for most, perhaps late twenties for some eastern regions. The West Coast stays in the mid to late teens.

Northerly quarter winds today, moderate for most but breezy to strong through Cook Strait.

Western North Island (including Central North Island)
Cloud then some sun breaks through, a few isolated showers, more so in the afternoon north of about Palmerston North, easing evening. Northwesterly winds.
Highs: 21-24

Wellington
May be a morning shower then cloud breaks to sunny spells in the afternoon, a shower or two possible again later in the day. Gusty north to northwesterly winds.
High: 20-22

Marlborough & Nelson
High cloud, breaking to mostly sunny weather in the afternoon. Nelson is a bit cloudier, spits of rain or showers for a time in the afternoon spreading from the west. North to northwesterly winds, breezy about Marlborough.
Highs: 22-26

Canterbury
High cloud, some rain in the high country (possibly heavy) then easing to showers and clearing during the afternoon. Nearer the coast high cloud breaks to sun in the afternoon as northerlies tend breezy northwest.
Highs: 23-28

West Coast
Morning rain with a few heavy falls then easing to showers by midday as northerlies change northwest.
Highs: 16-19