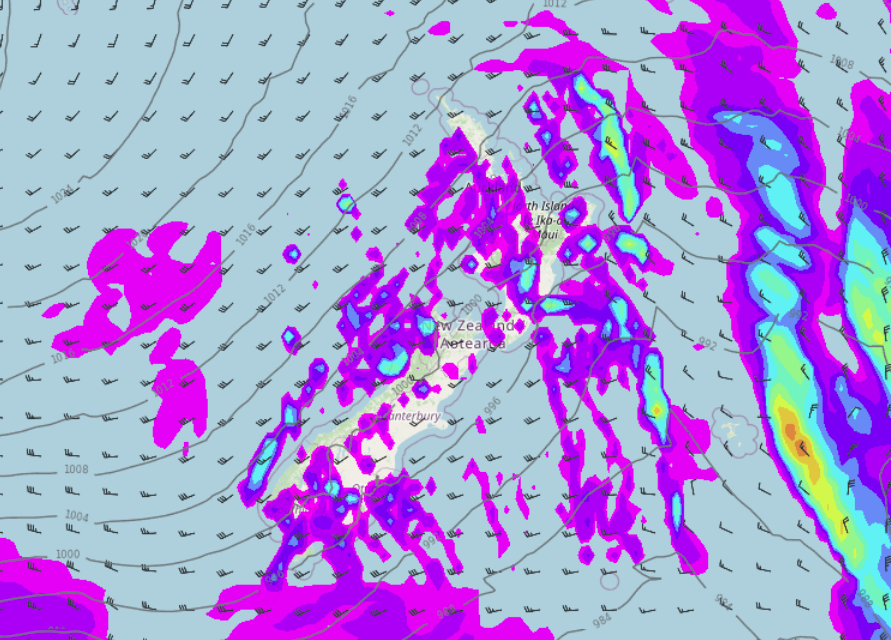 A cold front pushes over the North Island this morning, the rest of the country is in a southwesterly airflow. Unsettled conditions for most, for more details on your regions please check out the forecasts below.

Northland, Auckland, Waikato & Bay Of Plenty
Rain develops in the morning as northwesterlies change strong southwest with gales likely especially out west, there could be a rumble of thunder. A second burst of heavy showers moves through around midday Auckland southwards with a chance of thunderstorms and hail then easing evening and winds start to ease too. Becoming dry in the evening for the Bay Of Plenty and some other eastern spots.
Highs: 12-14

Western North Island (including Central North Island)
Morning rain, possibly heavy with thunder, easing for a time then heavy showers in the afternoon with thunderstorms and hail possible for Kapiti through to the Central North Island. Showers ease later in the evening. Northwesterlies change gusty southwest in the morning, gales about the coast in the afternoon then easing later in the day. Snow lowers to 700 or perhaps 600m.
Highs: 5-13

Eastern North Island
Mostly sunny, a few showers develop about Wairarapa in the morning then spreading northwards in the afternoon as northwesterlies change gusty southwest. Showers clear later in the evening. Wairarapa may see heavy showers with a chance of thunderstorms and hail for a time. Snow lowers to 600m before clearing.
Highs: 13-16

Marlborough & Nelson
Southwesterlies freshen in the morning bringing showers, clearing in the afternoon for Nelson with sun breaking through. Showers becoming around midday for Marlborough with a chance of thunderstorms and hail then clearing evening with southwesterlies dying out. Snow may lower to 600m for a time before clearing.
Highs: 11-14

West Coast
Heavy showers first thing, perhaps a thunderstorm with some hail then easing, sunny spells develop in the afternoon for South Westland. Later in the evening rain with heavy falls pushes into Fiorldand then spreading northwards overnight. Snow to 300m in the south, 600m in the north, lifting later in the day. Strong southwesterlies gusting to gale about the coast then easing at night.
Highs: 8-12

Southland & Otago
Heavy showers in the morning, perhaps some hail then easing from afternoon. Conditions dry out in the evening as gusty southwesterlies (gales near the coast) ease then tend northwest. Rain returns overnight. Snow flurries to 300m lift later in the day.
Highs: 8-10