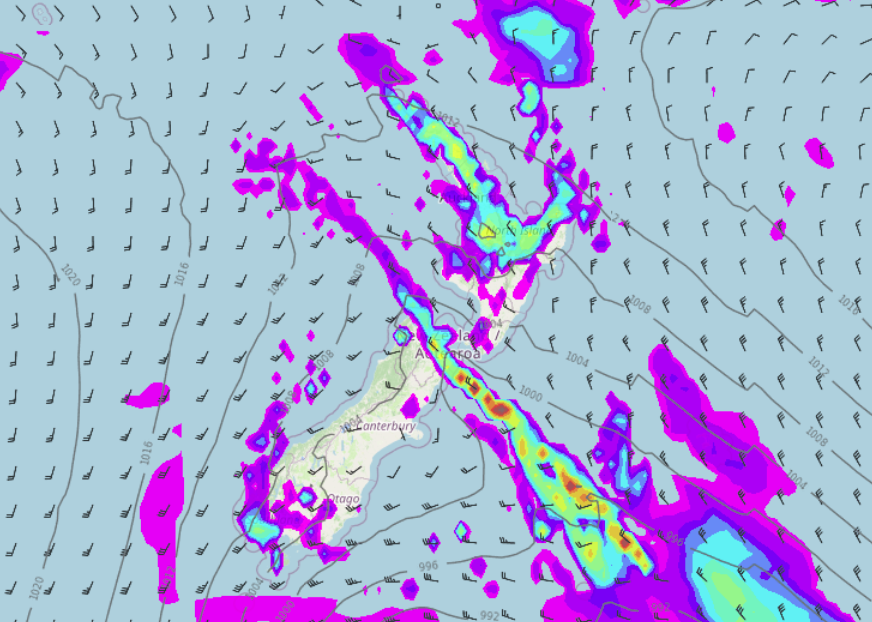 A cold front pushes northwards over the South Island today reaching the lower North Island this evening, southwesterly winds behind the front become quite strong especially in the east.

Northland, Auckland, Waikato & Bay Of Plenty
Partly cloudy with occasional showers, a few isolated showers may be heavy in the morning then easing, winds from the northwest. Late evening winds change southwest.
Highs: 23-25

Western North Island (including Central North Island)
Showers, early morning rain for Taranaki across to the Central Plateau then easing and some sun may break through, winds from the northwest. A southerly change develops in the evening bringing rain south of about Palmerston North.
Highs: 19-23

Marlborough & Nelson
Any morning spits or showers clear then some sun breaks through, in the afternoon northwesterlies change southerly bringing in some rain, easing overnight.
Highs: 21-24

Canterbury
Showers about South Canterbury spread northwards during the morning as southwesterlies freshen, winds becoming strong later in the day especially near the coast with gales out on Banks Peninsula. Showers ease overnight perhaps clearing for some.
Highs: 17-22

West Coast
Heavy rain clears South Westland in the morning breaking to sunny areas, heavy rain clears further north during the afternoon although it may remain a bit cloudier. Rain clears Buller early evening then late evening there could be a brief shower or two for coastal areas north of Greymouth. Northwesterlies change southwest.
Highs: 17-20

Southland & Otago
Early rain eases to showers, clearing at night. There may be a few light snow flurries down to 600m later in the day before clearing. Otago has a similar set up however it dries up in the afternoon with sun breaking through then a few further showers may push back in later in the day. Fresh southwesterlies, strong to gale force about the coast.
Highs: 13-17