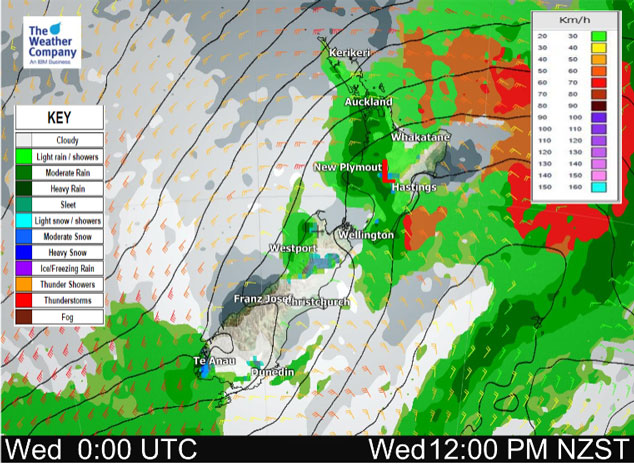 A cold southwesterly airflow over the South Island spreads over the North Island this morning.

Northland, Auckland, Waikato & Bay Of Plenty
Showers, some may be heavy with hail / thunder in the morning then easing from afternoon. Westerlies change strong southwest in the morning, a risk of gales at times especially through Auckland then easing evening.
Highs: 11-14

Western North Island (including Central North Island)
Showers pick up during the morning, chance of a heavy fall with some hail (may even be thunder about coastal spots) then easing mid to late afternoon. Northwesterlies change southwest in the morning, strong about Taranaki.
Highs: 8-14

Marlborough & Nelson
Southwest winds freshen in the morning bringing some cloud, breaking away late afternoon. There may be a shower or two otherwise mainly dry.
Highs: 13-15

Canterbury
A fresh southwest change in the morning brings a few showers then clearing with increasing sunny areas from afternoon. Southwest winds die out in the evening.
Highs: 8-10

Southland & Otago
Early morning rain eases to the odd shower for Southland, brief sun may break through at times. Becoming dry for Otago by midday with areas of sun more likely in the afternoon. Showers pick up again overnight for all with a fresh southwest change. Snow overnight on surrounding hills.
Highs: 7-9