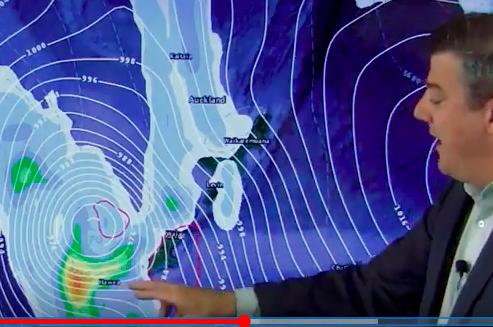 A tropical cyclone north west of New Zealand is going to transition out of tropical cyclone status and then deepen into a new system as it moves into the New Zealand area late Wednesday and across Thursday, most likely making landfall in the South Island – a rare event but does sometimes happen there.

The storm will bring the risk of wind damage and flooding, mostly to the South Island – although remnants of the once tropical cyclone will deliver heavy downpours to the North Island as well, along with a chance of localised flooding.

The storm is a serious one to monitor – but the good news is that it wonâ€™t linger too long, hopefully clearing through the South Island on Thursday leaving only patchy rain and showers on Friday and winds easing back.

The heatwave will also end in the South Island with a much cooler south to south west change arriving on Thursday and Friday. Not so many 30+ days in the 10 day forecast now.