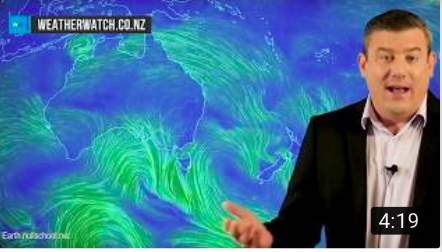 The weekend and even the start of next week looks a little repetitive around NZ with a large block of high pressure crossing over parts of the South Island while windier E to SE winds affect the North Island bringing cloud and showers in to the east and pushing inland to some degree.

It will be fairly cold going into Saturday for the South Island first thing but temperatures will gradually lift into next week. Speaking of next week, a more classic Autumn set up with a cold front moving up the country mid week from the west.

Meanwhile Western Australiaâ€™s next cyclone still looks highly like to form and reach Severe Cat 3 status. But the modelling about the precise tracking next week still remains unclear – we show you to the two different possible outcomes.