VIDEO: Heavy rain and snow for parts of NZ this weekend, colder winds next week 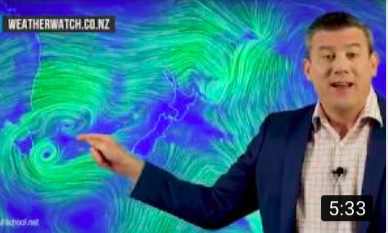 A surge of heavy rain and snow will be crossing the country this weekend as a deepening large low moves in. Winds will pick up from the NW over the North Island on Sunday with more rain, mostly in the west.

Eastern parts of the North Island look mostly dry. However the South Island has both rain and snow with precipitation falling on both western and eastern coastlines.

Next week a storm well south of NZ will help dredge up a colder southerly, mostly for the South Island, with wintry weather peaking on Tuesday then easing.

Just wanted to say great job Phil, very coherent and easy to follow your weather report. I like the way you keep us informed of the variables that could cause changes as well as reviewing the forecasting of a few days to show how things are on track. Keep up the great work!