VIDEO: Cyclone Ann forms in the Coral Sea, while NZ has a ‘typical’ Autumn week ahead 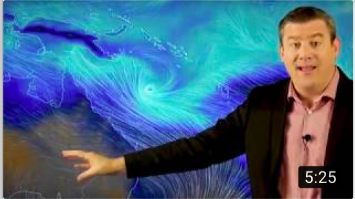 We have an out of season tropical cyclone in the Coral Sea called Ann which formed over the weekend. The tropical storm poses no threat to New Zealand but is expected to track westwards into northern Queensland as a weakened tropical low later this week.

This means rain will be the main feature, not wind. For NZ we have a cool and windy south west change today but despite the temperature drop (of several degrees) most regions are either average or still remaining above normal for this time of year.

Some south eastern sections of both islands may be below average today but that is those areas are in the minority. Warmer weather returns to the south on Tuesday. This week sees showers and cold changes, windy and calm days – itâ€™s a typical Autumn week and weekend coming up weatherwise in New Zealand.