VIDEO – Check out this spectacular shelf cloud rolling in to Sydney 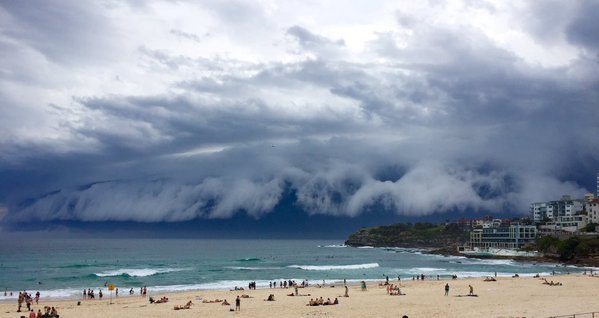 A spectacular shelf cloud was seen slowly moving over the ocean toward Sydney’s Bondi Beach, before dumping rain on the city.

“Walking towards the beach it looked to me like a huge wave coming from the back of the ocean about to swamp us all!” Hannah Murphy told CNN on Friday.

“People were running from the streets to capture the unbelievable cloud formation.”

Documentary maker Will Reid filmed this amazing video of the storm rumbling toward land. “I think Sydney just perfected the shelf cloud,” he tweeted.

Nicole Keijzer was on her way to Bondi Beach to swim when she spotted the cloud that she described as “wave in the sky.”

A storm about to punish Sydney’s Eastern suburbs. pic.twitter.com/r5bECt1G3B

“People started running down to the cliff edge to take photos… All of a sudden it felt very muggy, and the wind turned warm.”

Keijzer said she quickly abandoned the beach when she saw the rain approaching.

“I saw the rain in the distance and everyone along with me ran out of the beach before getting pelted on,” she said.

Mid-afternoon, the Australian Bureau of Meteorology issued a severe thunderstorm warning, urging residents to stay indoors and away from windows, unplug appliances and avoid using phones.

By late afternoon, the bureau said conditions had eased though more severe thunderstorms were still possible.