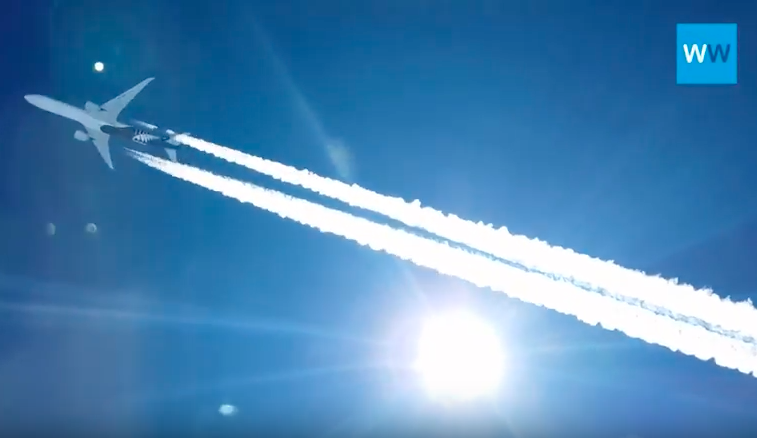 WeatherWatch.co.nz was recently sent this video from Air New Zealand Captain Matthew Harrington, showing a view most passengers onboard usually only see from the side.

This type of view is very normal for pilots – but it’s perhaps a rare insight for most passengers to get a better understanding of ‘airline highways’ and how planes safely travel everyday between cities.

“The video was taken off the Southern coast of Australia” says Captain Harrington who was onboard NZ722.

“Aircraft fly along specified tracks which are pretty much straight lines between Cities. Aircraft flying West fly at even altitudes and aircraft flying East fly at odd altitudes so there is 1,000 feet of separation between aircraft” says Captain Harrington. “In Oceanic Airspace (non radar airspace) we can also offset to the right of track by up to 2 nautical miles which is why the 787 is out our left window. If we are at the same level as an aircraft (for instance both flying from Melbourne to Auckland at the same flight level) we will be separated by 50 nautical miles”.

While for some it might look close, the planes are actually well separated and fly on very set tracks safely away from each other. This happens globally every minute of every day and safely.

As for the contrails (the lines of clouds behind the plane) – this is caused by the water vapour that freezes and condenses immediately around the engine’s exhaust. These clouds usually disappear within minutes but can linger longer and form at higher altitudes where the air is very cold in comparison to the hot exhaust.

A big thank you to Captain Harrington and Air New Zealand for this exclusive video and permission to use it – and the great explanation and insights behind flight corridors.