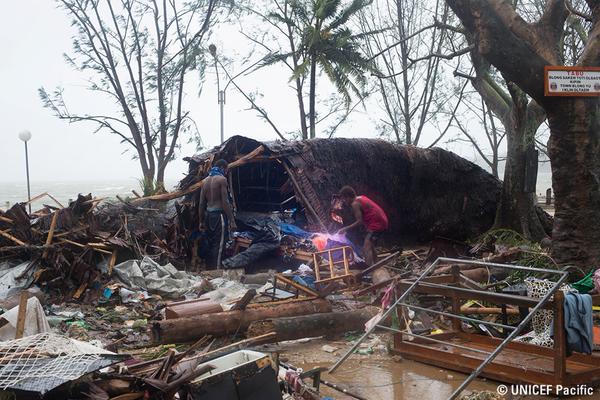 Up to 90 per cent of housing in Vanuatuâ€™s capital is reported to have been seriously damaged by Cyclone Pam, with still no information from the extremely vulnerable outer islands which are home to 33,000 people.

Oxfam Country Director in Port Vila, Colin Collet van Rooyen said today while six deaths have been confirmed this number is likely to climb once communities across the archipelago are reached.

â€œThis is likely to be one of the worst disasters ever seen in the Pacific,â€ he said.

â€œThe scale of humanitarian need will be enormous and the proud people of Vanuatu are going to need a lot of help to rebuild their homes and their lives.

â€œEntire communities have been blown away.â€

Oxfam has a team on the ground and more humanitarian response experts attempting to travel there today.

Mr Collett van Rooyen said immediate priorities in Vanuatu would be to provide shelter, clean water and sanitation to people, especially those left homeless. Temporary toilets, water purification tablets, soap and water containers would all be vital, he said.

Mr Collett van Rooyen said getting children back to school was a huge priority with nearly all schools damaged and school supplies gone.

Cyclone Pam made a direct hit on Vanuatu on Friday night, tearing through the archipelago with winds of up to 250kmh.

With more than 250,000 people at risk from the severe tropical cyclone there is real concern of a potentially high death toll and of enormous destruction, particularly given the traditional housing that is so prevalent through the islands.

The highly populated island of Efate, which includes the Vanuatu capital Port Vila, was directly in the path of the cyclone, as were a number of outer islands.

â€œThese islands have much less infrastructure than the capital of Port Vila and are extremely remote and hard to reach in the best of times,â€ Dr Szoke said.

â€œWe hold grave fears for the people on these outer and remote islands.

â€œItâ€™s becoming increasingly clear that we are now dealing with worse than the worst case scenario in Vanuatu,â€ she said.

Port Vila was recently named in the Natural Hazards Risk Atlas and is known as the city most exposed to natural disasters in the world because it faces a combination of risks including earthquakes, tsunamis, flooding and tropical cyclones such as Cyclone Pam.

You can support Oxfamâ€™s response to humanitarian crises by donating to their International Crisis  Fund https://www.oxfam.org.au/my/donate/international-crisis-fund-cyclone-pam or by calling 1800 034 034