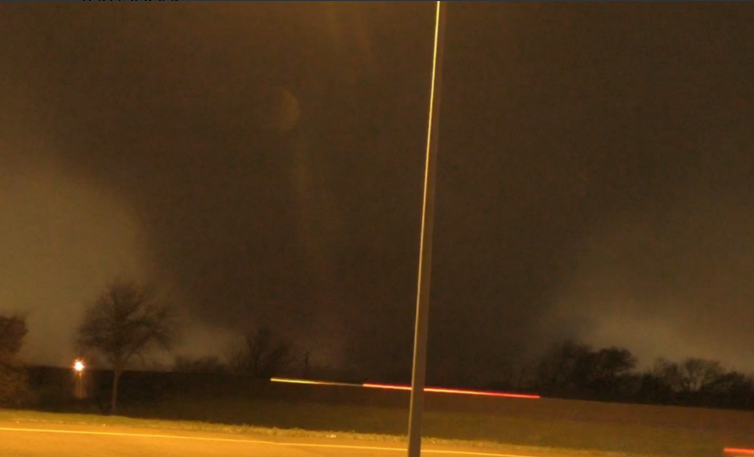 Severe storms and tornadoes tore through north Texas, killing at least 11 people in the latest incident of deadly weather in the nation.

Lt. Pedro Barineau with the Garland Police Department confirmed Sunday morning that eight people died in the storm that ripped through Garland.

Barineau said 15 people were hurt and 600 structures were damaged.

Three additional deaths were reported in Collin County, said Chris Havey, a spokesman for the sheriff’s office. He declined to release any more information until authorities can fully assess the situation.

In some neighborhoods in Garland, the storms ripped facades off houses, leaving gaping holes. Cars that had been in driveways ended up inside homes after the tornado barreled through, witnesses said.

Another view of the LARGE Tornado near Garland, Texas still in progress: https://t.co/3DKMj8is7m pic.twitter.com/UyVDAwFfDb

Officials said earlier that five of the deaths were related to vehicles hit by a tornado in southeast Garland.

“All I heard was the roaring of the tornado, and my mom told us to get in the bathroom,” McMillian said. “Then we went across the hall to make sure everyone was OK. The church across the street was destroyed.”

Afterward, they left their house and sought shelter elsewhere.

“We are in our car now, and I’m not sure where we are going to go,” McMillian added. “It’s extremely hot, and there is no power.”

Concerning the tornadoes…we will be sending teams out tomorrow to determine tracks and intensity and update frequently. #txwx #dfwwx

Lafayette Griffin and his family hid under a mattress and prayed as the tornado hit.

There was also a report of a tornado in eastern Ellis County, the Fort Worth office of the National Weather Service said. It was unclear if it was the same tornado.

Other parts of Texas were dealing with strong winds and precipitation, the weather service said.

And more extreme weather is forecast for Sunday, with an Arctic cold front bringing a nasty mix of snow, sleet and freezing rain from west Texas to New Mexico.

“By Sunday morning (Monday NZT), the snow, sleet and freezing rain will expand northeast across the southern Plains,” the National Weather Service said.

“Heavy snowfall amounts of 10 to 18 inches are forecast through Sunday evening across much of western/northwestern Texas, with 18 to 24 inches forecast across portions of New Mexico.”

Throw in some fierce winds, and parts of the Southwest could see 1.2 million people under a blizzard warning, the weather agency said.

In addition to snow, icy conditions and strong winds are expected from central Oklahoma up into Kansas, making the roads dangerous for driving.