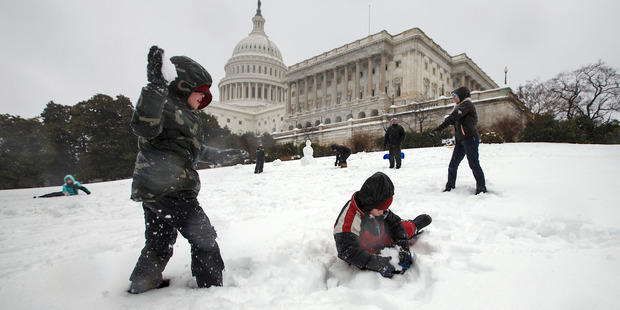 A major storm blowing in heavy snow and ice is gripping large swaths of the winter-weary US, leaving a dozen people dead and knocking out power to hundreds of thousands of homes.

Thousands of travellers were stranded as flights, including at major air hubs in Atlanta and New York, were cancelled, and nearly 800,000 homes and businesses lost power, mainly in Georgia, and North and South Carolina.

The latest brutal freeze to hammer the eastern states of the country since the start of the year has been dubbed “snowmaggedon”, “mind-boggling” and “historic” by major television networks and forecasters.

CBS News said at least 11 deaths had been blamed on the ferocious conditions.

“A strengthening area of low pressure will move up the east coast Thursday bringing with it significant winter weather from the southeast to New England (in the northeast),” said the National Weather Service, which had warned of a “mammoth dome” of Arctic air.

The massive storm – which had an estimated 100 million people in its path in 20 states – hit on Wednesday and by Thursday the National Weather Service had warnings in effect in numerous states, advising people to stay off the “dangerous” roads.

Earlier, President Barack Obama had declared states of emergency in Georgia and South Carolina to deploy federal resources to help deal with the frigid storm.

The US capital’s downtown was a virtual ghost town as snow blew in late yesterday, with temperatures hovering around minus three degrees Celsius.

The severe weather has also been playing havoc with US businesses and governments’ bottom line.

Oil prices, by contrast, have been propelled higher by the extra-cold weather and succession of winter storms.

State and local governments are scrambling to cover the cost of clearing the snow, especially as road salt prices skyrocket amid shortages.

Farmers and rural residents are also facing high prices and shortages of the propane used to heat their homes and barns.

To the knocker, Climate Change is not at all about heat heat and more heat. It is all about bigger and far more severe and that includes cold systems as well. That fact has been well publicised. Climate includes everything, not just sunny days. Some areas will indeed get colder in NZ too, and the USA also has many orographic areas. Noticed how the mid-latitude westerlies are currently knocking NZ as well?

And damn that global warming for what it is about to do to the Great Lakes – see link.

Good one you simple minded fool

takes a fool to recognize a fool