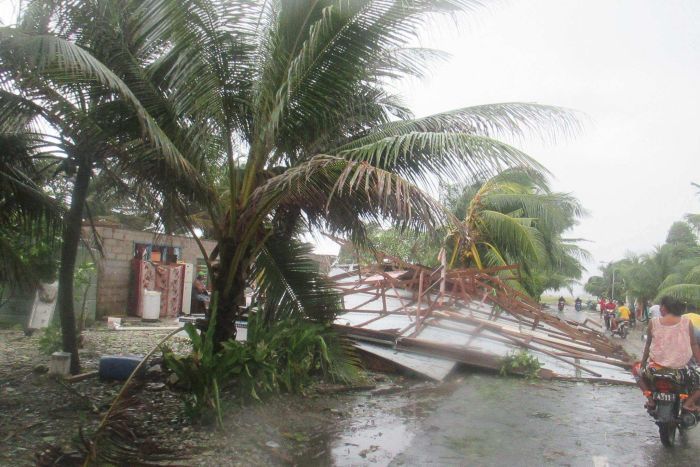 The first tropical cyclone for 2016 is lashing Fiji’s outlying islands, after causing destruction in parts of Tonga.

The Fiji Meteorological Service issued strong winds warnings and gale warnings across the islands as Ula moved west-southwesterly at 15 kilometres an hour.

It may be quiet in the tropical Northern Hemisphere, but Cyclone #Ula continues to churn in the South Pacific: pic.twitter.com/hZUZ8kAElh

The Vava’u and Ha’apai islands were placed under a state of emergency to allow evacuation procedures to take place ahead of the storm.

Authorities in Tonga reported damage to houses and fallen trees, but no casualties.

“Initially it showed that it was going to weaken, however it has slowed down and maintained its intensity over the last 12 to 24 hours,” he said.

“We will continue to monitor it very closely.

“The models are giving some indications to weaken when it goes further south of Fiji.

“It is still out in the sea, however the winds and the cloud bands associated with it are affecting the islands in the eastern division, especially in the Lau group. And it its expected to pass between the islands of Kabara and Ono-I-Lau.”

Mr Kumar said Fiji’s National Disaster Management Office had activated its emergency operations as well as giving out advisories on the safety and precautionary measures that needed to be taken.

He said small boat operators were being urged to take extra precautions.

“Especially for those travelling by sea, the mariners, the seas are rough to very rough, and close to the centre phenomenal seas,” he said.

“For those living in the coastal areas, damaging heavy swells with the sea flooding of low lying areas is also expected.”