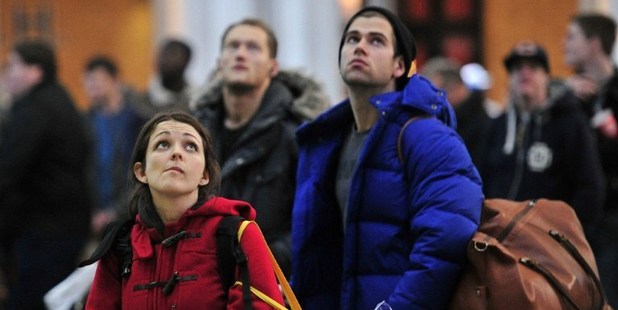 A man died in a fast-flowing river as high winds and heavy rain lashed Britain, disrupting transport as people headed home for the Christmas holidays.

The Met Office, Britain’s national forecaster, issued amber warnings for rain – the second most severe level – for much of the southern half of England and Wales.

The body of a man was found in the swollen Rothay River in Cumbria, northwest England, where police said the water was “very fast-moving and dangerous”.

“It was fast flowing, and a lot more water than normal, so yes, it’s fair to say that the weather contributed to the problem,” said Inspector Chris Wright of Cumbria Police.

Around 30 flights from London’s Heathrow airport were cancelled. Most were short-haul routes to Europe.

Train companies reduced or cancelled some services and drivers were battling difficult conditions on motorways because of excess surface water.

Strong winds forced the closure of the Dartford crossing bridge, a key link in the main M25 motorway around London, causing long queues of traffic on one of Britain’s busiest roads.

The Met Office warned that flooding was possible in southwest England as heavy rain fell on already saturated ground.

In Cornwall, 3,000 homes and businesses were without power after high winds brought down overhead power lines.

Rail operators were bracing for disruption, putting hundreds of engineers on standby to help clear potential debris from tracks.

Some of the busiest train lines, such as the one linking London and Birmingham in central England, were forced to operate under speed restrictions because of the conditions.

But Eurostar train services linking Britain with France and Belgium were unaffected.

In London, Winter Wonderland – a miniature theme park and Christmas market in Hyde Park – was forced to close for the day for safety reasons.

Rain and winds also battered Ireland, where more than 5,000 telephone landlines were put out of action over the weekend by high winds.