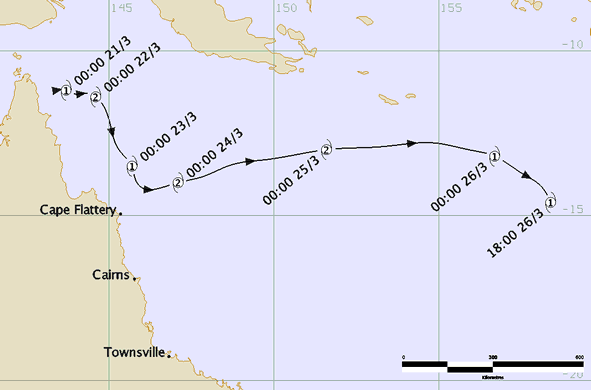 The Bureau of Meteorology says a Tropical Cyclone has formed off the far north Queensland coast and predicts the formation of another off Western Australia’s north-west coast later this week.

The category one system is currently about 435 kilometre north-east of Cooktown in Queensland and is expected to become a category two by Wednesday morning.

The weather bureau said the system was moving south-west at 12 kilometres per hour.

Forecaster Jess Carey said the system was likely to generate a lot of rainfall and wind, but unlikely to make landfall.

“We are expecting quite a lot of rainfall and gale-force winds to begin over the next 24 hours and persist for 24 hours after that, associated with the movement of this system which we’re expecting to continue developing over the next little while,” she said.

“The latest track map that we have on our website certainly indicates a category two system, coming somewhere between 150 and 200 kilometres off our coast, before turning right and essentially taking a U-turn and moving away from the coast.”

Disaster authorities in far north Queensland said they were well prepared for a potential cyclone.

“We’re fully cleaned up from Cyclone Ita that came through in April last year. We’re probably as ready as we can be,” he said.

“It’s the usual operating procedure so that people get their cyclone kits together.”

A cyclone watch has been issued for communities from Coen to Cape Tribulation.

Meanwhile, the bureau said it was likely a tropical low brewing off Western Australia would develop into a category one cyclone between Wednesday night and Thursday morning, and eventually intensify into a category two system.

It is forecast to bypass the Kimberley and impact upon the West Pilbara, Exmouth and Gascoyne regions.

The tropical low is currently stirring up waters about 760 kilometres north of Karratha.

Bureau spokesman Brad Santos said the system could be the first to threaten the West Australian coast this cyclone season.

“It’s been a remarkably quiet season,” he said.

“There have been a couple of tropical lows which have threatened the coast and moved inland and caused heavy rain and flooding, but we are yet to see a tropical cyclone develop off the north-west coast of WA.”

The Department of Fire and Emergency Services (DFES) said people who live in the Pilbara between Port Hedland and Ningaloo need to prepare their homes and families for strong winds and heavy rainfall.

It said that included residents in Karratha, Onslow, Exmouth and surrounding areas.

Gales with gusts of up to 100 kilometres per hour could develop between Karratha and Exmouth on Thursday afternoon and affect as far east as Port Hedland.

Heavy rainfall over the western Pilbara and northern Gascoyne may also lead to flooding.

“We have had a lot of rain in the region recently. If you have been affected by heavy rain or flooding and live in this area, now is the time to take steps to prepare your property,” Mr Coutts said.

“If you have a smart phone, consider downloading the SES assistance app.

“You can never be too prepared for a severe weather event.”

“Entering flooded creeks by foot or by vehicle is an extremely dangerous act,” he said.

“There are so many hidden dangers lurking just below the surface of the water and those, along with the force of the water flow, can carry you away or pull you under at a moment’s notice.

“Parents, please also discourage your children from playing or swimming in flooded creeks and drains. Floodwaters are deadly.”