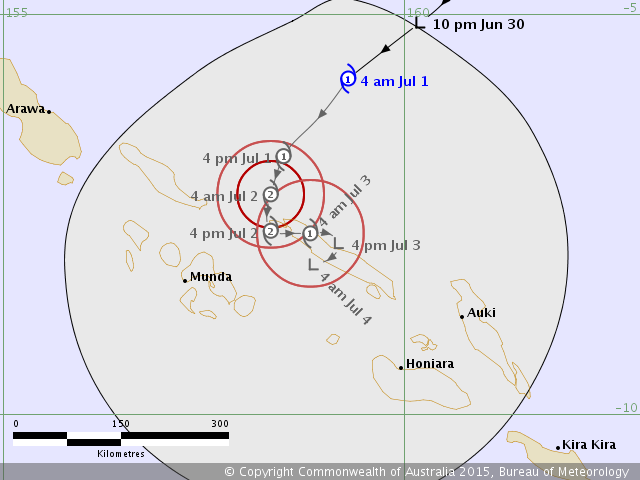 Two months after the supposed end of the Tropical Cyclone season, the Australian Bureau of Meteorology has published details of Cyclone Raquel near the Solomon Islands.

The cyclone is only a category 1 at this stage, with sustained winds near the centre of 65 km/h – and gusts of up to 95km/h.
The Bureau said Raquel is 410 kilometers north of Honiara, and moving at just 16km an hour – though it should intensify as it approaches the Solomon Islands during today and into Thursday.

The Bureau says the system will remain very far offshore – and does not pose a threat to the Queensland coast.

That sure is out of season, although I am sure I have seen it happen sometime in the past.

Could it be a sign that El Nino is in fact beginning to kick into gear? It certainly suggests that the tropical waters are warmer than normal

You’re right Dave, BOM is being as alarmist as ever and neglect to mention cyclones going right back into the 1800s. Jonova covers this and mentions 12 historical cyclones in July. Can’t imagine why BOM don’t know this maybe it’s got something to do with Paris this year.