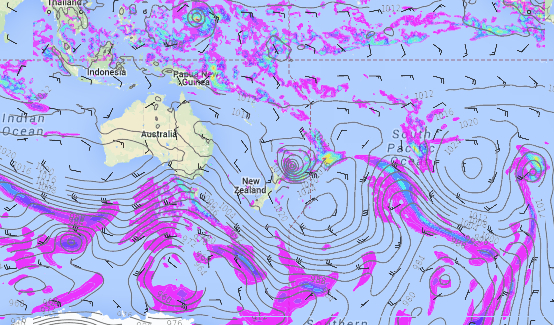 It’s the start of a new month, and as such we take a moment to assess how we did prediction wise through September, and of course look ahead.

Back in August we said September would be more predictable but still â€˜messyâ€™ â€“ that was certainly the case with plenty of â€˜ever changingâ€™ wind directions. As we said â€“ spring is here!

We said there would be no major severe events â€“ which turned out to be true.
There were isolated cases of flooding and snow in various parts of NZ but it was hit and miss, and most people werenâ€™t affected negatively.

The westerlies are here! This makes long range predictions much easier because the general weather flow spreads in from the Tasman and Southern Ocean and is very predictable.
The ranges and mountains of New Zealand make the westerly more dramatic with a stark contrast from east coast (often sunny, warm, dry) to the west coast (cloudier, wetter, cooler).

Itâ€™s important to note that October is one of our most aggressive months weatherwise, and the sub-tropics can fire up suddenly and NZ can get hit by a late winter storm. AT THIS STAGE we donâ€™t see that in any of our various modelling but it wouldnâ€™t be Labour Weekend in New Zealand without the threat of a storm nearby â€“ so something to be aware of later in the month, but hopefully conditions wonâ€™t be too severe this October, compared to previous Octobers.

Current modelling suggests things are very active north of NZ â€“ but a series of highs in October should keep the sub-tropics (and tropical lows) away from us for now.
This is something we will keep an eye on as we head further into the month, and keep our readers fully up-to-date if it looks like something serious is on its way.

Please let us know what you think – we value your feedback and continually strive to improve in both our forecasts and models – you can head to our Facebook page, here, or leave a comment below.